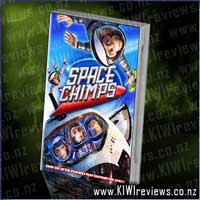 Disclosure StatementFULL DISCLOSURE: A number of units of this product have, at some time, been supplied to KIWIreviews by the company for the purposes of unbiased, independent reviews. No fee was accepted by KIWIreviews or the reviewers themselves - these are genuine, unpaid consumer reviews.
Available:
January 2009

I do have to admit, that movies aimed at children, are a guilty pleasure of mine. When you live in the world of a mature adult, sometimes it's good to be able to escape from the banal monotony that our lives become. Sometimes you just want to watch a bunch of talking monkeys getting blasted into space and having adventures. A great distraction.

In fact it is one of the joys of visiting my friends who have children. I can "babysit" and watch some free movies. This film was certainly entertaining, though it was certainly predictable, due to the rather one-dimensional personalities of the characters. But these aren't things that children would understand. To the kids, it is a colourful, action-packed movie with talking monkeys and aliens in it.

It was definitely not a believable movie, but it did what it was meant to do. It entertained. The characters were stereotypical; the strict, muscle bound commander, the irresponsible slacker, and the token female, but the little ones loved the film, and it managed to keep them quiet most of the time. One of those films that is targeting the children, and doesn't have much to appeal to an adult.

But as a distraction, it served me well.

Blast off alright!! This is just the coolest movie. Like it says on the DVD, the whole family loved it. Children, parents and even grandparents!
This movie I have marked 5 for believability because it isnt possible of course, the monkeys talk.... But the storyline is great about a fun loving chimp who doesnt want to step into the shoes of his legendary grandfather but is forced to when their ship crashes on another planet. It has comedy and love. Adventure and imagination.

Our family were rivited to their seats and the movie was watched from beginning to end without anybody moving. We have since watched the movie over numerous times and it is one of those ones where everytime you watch you laugh at something else you hadnt noticed the time before.
Space chimps is one for the Dvd collection, a 'gotta have'. I would highly recommend it. It isnt the kind of movie you just watch once.