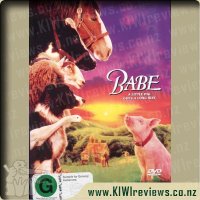 Introducing a barnyard full of captivating characters unlike any you've ever met! There's farmer Hoggett; Fly, the sheep dog; Rex, her shepherding partner; Ferdinand, the quacky duck; Maa, the elderly ewe; and the newest addition Hoggett Farm, Babe, a most unusual Yorkskshire piglet. It's a delightful story the whole family will love!

Babe, a wonderfully charming movie about a little orphaned big whom is adopted by a sheepdog and then against all warnings from the other farm animals, defys all odds to become a sheep herder. Granted initially the little pig actually believes he is a dog, but even when he learns he is a pig it still wants to become a sheepdog.

This delightful story will not appeal to children only, it is a great movie that adults will also enjoy. A well rounded family movie. I was amazed at how well the animals in the movie looked so real and natural when speaking and I also liked what the film was depicting, even if it is through a little piglet. The message is a great one, even if you do not pick up on it immediately. We are all raised in a society where we are expected to conform. But not this little piggy lol

There are some amusing moments, some funny moments, and some sad moments. Yes there are even some 'hold your breath - oh no' moments. But the end result is a wonderful one. I love the Babe movie as does my daughter and we have both watched it several times beforw, and I imagine we will watch it plenty more times in the future too.

When I saw this DVD, I instantly thought 'Bahramyou'. A phrase that, for those that have seen the film is incredibly important. But saying it out loud, I suddenly realised what I was saying. 'Baa Ram Ewe'. All sheep related terms. This movie came out nearly two decades ago, and up until today, I thought it was just a random made up word.

Well I feel like an idiot, but that is the joys of films. There are many hidden gems, some hidden more than others, some that are meant to be obvious. But all movies have things that you will always associate with that film. Babe has a bucketload of them. You can't name just one. Whether it's a quote, a voice, an animal, an action. There is something in this film that will stick in the mind of every single person that watches it.

And that is what makes this movie so magical. It goes far beyond the plot of a pig herding sheep. But that is an incredibly cute image anyway. The imagery is great, the morals are acceptable, and it is rather realistic unfortunately with some parts of farm life, but that is what makes it great. It doesn't hide things. It gives you the good and the bad, and at the end of it, you still feel happy.

Auckland Viaduct, October 1966: a group of determined young men defy the police and government and, to the cheering of their fans, launch a coastal ship that has been converted to a pirate radio station which they intend to use to broadcast from the Hauraki Gulf.

It is the birth of commercial radio in New Zealand. Crazy as it seems, this is what it took to break the stronghold the Broadcasting Corporation had on national broadcasting ... more...