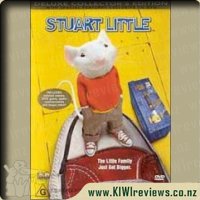 Join the fun when the Little family adopts an adorably spunky boy named Stuart, who looks a lot like a mouse.

Mr. And Mrs. Little fall in love with Stuart right away, but their older son George isn't so sure what to make of his new brother, and the family's white cat, Snowbell, devises a dastardly plan to get Stuart out of the house permanently. State-of-the-art special effects, laugh-out-loud comedy and rip-roaring hijinks make this the biggest adventure a Little can have.

Stuart Little is a story about a couple who have decided to adopt a sibling for their son and end up adopting a mouse.

So let's get the oddity of this movie out of the way, Stuart is a mouse, being raised in a human orphanage and this is all perfectly normal...? Once you get over that, and the fact that while it's a shock to the rest of the family, they get over it and no one else in the city thinks it strange, this is a fun movie, plus I love the sound of Michael J Fox's voice. Stuart has to struggle with living in a world not designed for him, winning his brothers love and surviving the household pet cat who hates the fact that a mouse is now higher up in the family than he is.

The animation is done well, Stuart doesn't look fake, which adds to the believability of the movie, but some of Snowbell's moments of non-catlike actions do look a bit fake, and the cats mouths moving when they are talking doesn't look quite natural. The story itself is sweet, Stuart trying to fit in, eventually wins over George (his brother) and then suddenly his birth parents turn up to take him home. It's all about what real family is.

Ignore the fact that he's a mouse and this is normal in their world and you have a fun little movie for the kids.

Excited about visiting Asia for the first time but nervous about meeting Nick's family, Rachel is unprepared to learn that Nick has neglected to mention a few key details about his life. It turns out that he is not only the scion of one of the ... more...