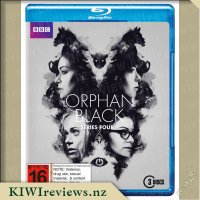 The only way forward is to go back.

The only way forward is to go back. It's a new series with new characters, new clones and new secrets...and time to go back to the very beginning. The genesis of the Orphan Black universe holds the key to its future. In the profoundly surprising mystery that unfolds throughout Series 4, the stakes are raised, everything is up for grabs and the clones will learn no-one is to be trusted--friends become enemies and enemies hide behind many masks.

Some threats have never been greater - The Neolutionists are now everywhere yet nowhere; And many questions may finally be answered - is Delphine really dead? Who is the unknown assailant that shot her? What is the horrifying twist that may fracture the 'sisterhood' forever? This is a television series that you really need to watch from the start. I myself had not seen any of the show beforehand, but thought it may be easy to pick up. Unfortunately, I was wrong, and had to stop after a couple of episodes and do a rush recap of the plot summaries of approximately 21 hours of "backstory" from seasons 1-3 (and it still took a while to figure out. The main hindering factor, that makes you have to watch from the start, is the entire premise of the show. Clones. Eight of them in Season Four, played by the same actress, with different names and hairstyles, but obviously the same facial features (there are currently 15+ clones that have been mentioned in the storyline).

The whole premise of the show did intrigue me, despite my initial confusion. A group of women, discovering each other, learning they are all genetically identical clones, and are hunted down by multiple religious and scientific groups. But the clone aspect does mean you have to pay a lot of attention to who is doing what, for the entire series. The start of each show, has the usual "previously on Orphan Black" recap, which I recommend as prescribed viewing, as it recaps scenes in previous seasons that are relevant, so the season is not an independent standalone story arc, it is a continuation of the same plot lines in the previous seasons.

For a sci-fi drama, I found it was quite well done in the way that it portrayed the situations. We are provided a futuristic world of technologies that are improving, surpassing, and replacing the capabilities of the human body, where gene manipulation and cloning are practiced, and yet it feels down-to-earth and gritty. I feel like this could be set a mere few years in the future, rather than in a far off time that will not affect me. This feels grounded in a reality that I can empathise with.

The main arc of season four, is actually rather short, and could be condensed into a couple of episodes, but main compelling portion of the show, is the interpersonal drama that occurs between the clones in the side arcs. You quickly begin to pick your favourite clones, which is a feat in itself that I must applaud the actress for. Tatiana Maslany does a brilliant job at portraying multiple visually similar clones, that have a variety of wildly different (but still consistent) personalities, backstories, and motivations. That's not even going into the obvious difficulties needing to be overcome to play multiple characters that are in the same scene together. It is seamlessly edited.

The storyline itself, didn't hit as hard as it should have, but I can only blame myself for that. I should have watched the first 3 seasons first. I still recognised significant and pivotal moments, but without the backstory, it lost a lot of it's intended intensity. But it has my attention. I'm always looking for a good sci-fi show, and I think this might be just what I am looking for. Time to start from the beginning. So would I recommend this product? Yes, but only after you watch it from the start (I hear there's a box set available)

Hailed as one of the foremost stand up comedians of his generation. Star of stage and screen. Tireless supporter of charity. Runner. Political campaigner. Fashion Icon. Eddie Izzard is all of these things and more. He breaks all the rules in comedy. Eddie Izzard will bring his massive FORCE MAJEURE world tour to New Zealand in February 2015.

Force Majeure is the most extensive comedy tour ever. Launched in March 2013, once completed ... more...