ProdID: 6530 - David Attenborough's Rise of the Animals: Triumph of the Vertebrates -  Type of Show: Documentary 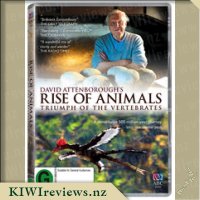 David Attenborough's Rise of the Animals: Triumph of the Vertebrates product reviews

From the triple Emmy-winning producers of David Attenborough's First Life comes the sensational follow up David Attenborough's Rise of Animals. This landmark series charts the complex and fascinating evolutionary path that connects us, and all other vertebrates living on Earth today, to the very first life forms with a backbone.

It is a remarkable journey that spans the ages, and reaches to the far corners of the modern world, including incredible encounters with magnificent wildlife and privileged access to previously unseen fossils and excavations in China. It uses captivating CGI, combined with cutting-edge science, to recreate some of the most significant moments in the evolutionary tree, including the very first vertebrate to step on to land.

This epic story of the vertebrates' rise to dominance also reveals that we are the heirs to a magnificent heritage, uncovering the amazing ways that our human bodies bear the traces of this breath-taking evolutionary journey.

Special Features:
•  Q&A with David Attenborough
•  Behind the Scenes Clips

David Attenborough is the ultimate in documentaries about animals and the likes, and since we are homeschooling our children I knew that such a DVD would be perfect as a learning tool (science, animals, history, dinosaurs... Where could it go wrong?).

My son saw the case for this and was straight away requesting to know what it was about and when could we watch it. I told him it was going to tell us about how bodies changed over the years to give us the sines that we have today. Turning this on, it's split into two episodes, each one just over an hour, so my first reaction was to tell me son that we wouldn't be able to watch it all in one go, he requested and I agreed to watching a little bit at a time but we ended up watching the entire DVD in one sitting with my seven and six year olds both hooked to the screen.

A lot of this takes place in China, the amount of fossils that have been found there and the wealth of information gained is amazing and for a total viewing time of 144 minutes, there is a tonneof information and learning going on in this show. My seven year old kept popping out question after question for me and had to keep being told to keep watching. I knew the information was sinking in when I asked him later what was it was about and he said "it's about how we got our backbone and about how animals bodies changed over years and years and years!"

Since our first viewing of this DVD we've watched this another two times, each time at my sons request and I have to say that I learned something more each time, it's so easy to miss out on things when a great bit of info hits you in the face. I particularly found it interesting to be shown via CGI, how fish developed over time so that they could firstly move easier and quicker under water, to being able to walk on land and slowly over time into dinosaurs, animals and then of course, us humans. There's a good amount of CGI happening, afterall there are creatures etc. that aren't alive anymore and it was done well, it looked real enough for my kids to be questioning where they could find the creatures. A few timeline charts crop up as well, but not enough so as to be overwhelming and it's a good intro into flow charts or the kids.

If you enjoy history and learning more about where we come from as a species then this is the DVD for you and it's great for all ages, I really enjoyed it and I'm planning on getting more for the kids and school, my seven year old is requesting to watch it a fourth time, the six and four year olds enjoyed it and I'll be loaning it to my grandparents.Well worth the time and the repeat viewings.

Mega Structures Mega Movers: Air-Land-Sea takes an eye-popping look at some of the greatest structures and machines ever created.

Get inside these superstructures and uncover the cogs, bells and whistles that make them work.