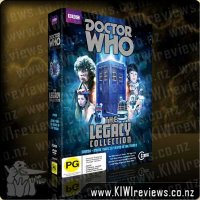 Shada
The Tom Baker Years 1974-81 This special DVD release features the legendary unfinished Fourth Doctor six-part story, newly restored from original film negatives and studio recordings, with 1992 linking material from Tom Baker. The Doctor, Romana and K9 receive a message from an old friend - a retired Time Lord living as a college Professor in Cambridge. He's misplaced an ancient Gallifreyan artefact that could unlock the dark secrets of Shada - the lost prison planet of the Time Lords - and unless they find it before the crazed scientist Skagra, every sentient being in the universe is doomed...

SPECIAL FEATURES:
•  Bonus Animated Version - Produced in 2003 for BBCi, this webcast of Shada features the Eighth Doctor Paul McGann and Lalla Ward. In 'Flash' format, accessible via PC or Mac
•  Taken Out Of Time - A frank and revealing examination of why Shada became the only Doctor Who story never to be completed, featuring Tom Baker (the Doctor), Daniel Hill (Chris Parsons) and director Pennant Roberts
•  Strike! Strike! Strike! - How industrial action impacted Doctor Who over the years
•  Now And Then - Compare the Cambridge locations as they appeared in 1979 with how they look today
•  Being A Girl - A look at the representation of women in Doctor Who
•  Production Information Subtitles
•  Photo Gallery
•  Digitally Remastered Picture and Sound

More than 30 years in the TARDIS
This is an extended version of a documentary first shown in November 1993 as part of the 30th anniversary celebration of everybody's favourite science-fiction series, Doctor Who. Including contributions from Doctors Jon Pertwee, Tom Baker, Peter Davison, Colin Baker and Sylvester McCoy, plus a whole gang of their companions, More than 30 Years in the TARDIS was a fitting tribute to a series that had ended in 1989. With many stunning recreations of classic scenes, this special documentary contains rare footage, deleted scenes and classic monsters as you've never seen them before...

SPECIAL FEATURES:
•  Remembering Nicholas Courtney - A look back at the life of Nicholas Courtney, who played the Brigadier in Doctor Who, recorded shortly before his death in 2011
•  Doctor Who Stories: Peter Purves - Actor Peter Purves talks about his time on Doctor Who in this interview originally shot for the BBC's 2003 documentary The Story of Doctor Who
•  The Lambert Tapes: Part One - Doctor Who's first producer, Verity Lambert, looks back at the early days of the programme in this interview also shot for The Story of Doctor Who
•  Those Deadly Divas - Actresses Kate O'Mara, Camille Coduri and Tracy-Ann Oberman are joined by writers Gareth Roberts and Clayton Hickman to examine the role of the diva in Doctor Who
•  Production Information Subtitles
•  Photo Gallery
•  Digitally Remastered Picture and Sound
•  Easter Egg

I was excited to see this DVD set, as we only have one set of Dr Who at home currently, and it is also Tom Baker. I suspect he is one of my favourite doctors, though he is the doctor I was first exposed to all those years ago. Shada is an unfinished Dr Who story. Strike action at the Beeb meant that it was cancelled before all of the filming had been completed. What was created, was then held in storage until now. Interestingly, that was not normal BBC procedure back in the day. They just didn't see why people would watch a repeat, so many tapes were destroyed or rescued by staunch fans (this is covered in one of the documentaries in the special features).

Shada is introduced by a now much older Tom Baker. We watched the first three episodes back to back. My daughter was entranced and didn't want to stop watching. "More Dr Who" was chanted at us until we decided to stop and make her go outside for some sunshine. The episodes are well put together, considering their incomplete-ness. I did find the cuts to current Tom Baker to be disruptive at first. These increase through the story, for anything that wasn't filmed but needs explaining. Eventually I got used to the interruption.

The script was written by Douglas Adams who wrote Hitchhiker's Guide to the Galaxy. My husband is a huge fan of his writing. I admire it, but I wouldn't call myself a die-hard Adams fan. Still the script for Shada was brilliant for its time. The jokes are very funny and the timing for delivery was spot on. Its such a shame this was cancelled at the time it was. Every so often, my husband would laugh and say "that's so Adams" about whatever a line was. My daughter loved K9 and the Dr and the Tardis so much she has asked to see more and more. So we have a happily converted 5 year old. The ex-film student in me adored the documentaries too. A great peek into the history of television making, women in film, and other bits and pieces.

As a fan of Doctor Who I had mixed feelings about a DVD set with an unreleased and incomplete story. Despite the appeal of viewing previously unseen material, I was concerned the main feature might have an unpolished feel to it. I was very much relieved to find this was not the case.

The box set consists of two disc cases: Shada and the More Than 30 Years in the Tardis documentaries. The material in this box set is clearly aimed at fans of the Classic Dr Who series and others will struggle with it. That said, die hard fans will enjoy the treasure trove of previously released and unreleased material.

Shada
Shada is a double disc of an unreleased Classic Dr Who story staring perhaps the most renowned incarnation of The Doctor played by Tom Baker. As discussed at length in supporting material on the discs, filming of the story was interrupted by industrial action and not resumed. The story is presented as a series of fully edited scenes with Tom Baker narrating the unfilmed sequences. The story itself shows the kind of wit you would expect of something written by Douglas Adams (of Hitchiker's Guide to the Galaxy fame). Fans of Romana and K9 will not be disappointed by this story. Unusually a female perspective of Dr Who is given in the Being a Girl documentary.

More Than 30 Years in the Tardis
Fans will readily relate to the Dr Who viewing experiences of the cast and crew presented in the main feature. Additional highlights include snippets from across the Classic Dr Who series allowing the viewer moments of nostalgia as they try to place them in context of the stories. Some of the shots of early homemade daleks are simply hilarious. Cast and crew members interviewed in the other documentaries are often quite candid in their discussions of the filming conditions and limitations placed on them. The Deadly Divas documentary offers an insight into character of the many female villains in Dr Who.

The Shada story is quite watchable despite significant periods of narration and its novelty is very rewarding for the dedicated fan. The documentaries make for an interesting and pleasant way to fill in time when not watching Dr who itself.

Our favourite trio take to the road as well as the skies in a new set of gruelling challenges that take the concept of driving to the very limit. They jet off to Japan for the latest in their world-renowned epic races, and have a massive motoring shootout against the Germans when Sabine and her co-hosts are ... more...