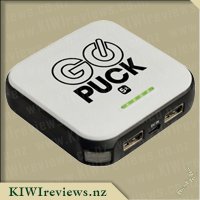 The GO PUCK 5X is an ultra lightweight charger storing enough power to charge any mobile device and fits in the palm of your hand. With the 5X, you can charge small phones (e.g. iPhone 4s) about five times. Includes an Active Mount and Micro-USB Cable. A few years ago I came across a game called "Ingress" - at that stage it was an AndroidOS-only game designed and run by Google. I won't go into the nitty-gritty of the game, but it is important to know that the game relies very heavily on real-time location data, with frequent data-bursts to the master database servers. This means it's somewhat data hungry, but also REALLY power-hungry as it requires the phone to have the GPS on constantly, set to a fairly fine-grain setting - it needs to know your location down to a very narrow tolerance indeed. I played it for about a month and then gave up on it when I couldn't justify the sheer cost of the data, and the loss of my phone after a couple of hours "play" due to flat battery.

Recently, I found myself stuck without a car, the need to be in many places around town, and a day spare, so I thought it could be fun to use the game to test this powerbank - it seemed like the perfect way to utilise it for those of us not into extreme sports as the game is extremely popular amongst those who enjoy geekery. So, ensuring I started the day fully prepared, I charged the Puck overnight, made sure my phone - an HTC One M8 - was also charged, and away I went.

Starting at 11am, I had the phone chugging away with the full array of location services turned on for the game's benefit. I had travelled a total of 21km over 3 hours by the time my phone was bleating about low power; it was down to just 4% when I plugged the powerbank in and hit the 'charge' button on the corner. I should add that I have made use of the supplied "Active Mount" to attach the unit to my belt, Batman-style. Knowing the phone was drawing considerable juice, I lowered the satellite-ping frequency from every 5 seconds to every 30 seconds. This really slammed down the performance of the app, but allowed me the decided advantage of apparently leaping around the town in 300m 'hops' while riding the buses, and enabled me to ping checkpoints that I normally moved into, and almost immediately out of, range of. While it also reduced the rate of power consumption by about 10%, it rapidly became annoying so I brought the ping time back up to 10sec bursts. A fair compromise.

Now the important part of that is that at those settings, I found that the Go Puck was able to supply enough power through it's 2A charge port to actually allow the phone to start recharging the battery while still maintaining the high drain. Over the next hour, my phone stayed fully powered and functional while I travelled a further 9km around town, and by the end of that was now charged up to 48%! By the end of the next hour, the phone had climbed up to 71% and still going strong, so I bumped the GPS ping back to 5sec bursts to see how well that would work out.

It would be an understatement to say that I was impressed when, after another hour, my phone was still going strong, and had only dropped to 69% charge at the maximum drain settings. I was rocking it hard as an Ingress Agent, had an activity record after 5 hours that rivalled that of the more advanced Level 8 agents in a full day, and had managed to advance myself up a full level and was well on my way to another advancement - something almost unheard of. I was honoured to receive a number of messages of awe and support from fellow faction members during the day as I managed to destroy enemy portals, capture new portals, forge links and form control fields at a rate unheard of for such a new agent. While I take a small amount of pride in that, the real hero of the day was the Go Puck - without which my phone would have gone to sleep many hours earlier... and it was STILL going strong!

The day's adventure ended, 8.5 hours after it started, with me having levelled up TWO whole levels in a single day, my faction well ahead in the leaderboards, a target on my back from the opposing faction's big-guns, and my phone still at 61% charge... and the Go Puck still had around 25% charge in it! For a 6600mAH storage device, that is incredible. This unit claims it will recharge an iPhone 5 times on a full tank... and I believe it. My HTC One M8 has a battery rated at 2600mAH, so this unit would only give it just over 2 full charges, but used as an external battery booster it gave me 5.5 hours of continued maximum-drain usage and still had juice in the tank to spare.

I have also used this to power a stunning small portable WiFi camera, while at the same time also recharging a small hand-held toy quadcopter drone a number of times, and even give a power boost to my newest toy-addiction, the Darkside Ollie from Sphero. In all cases, it has done its duty beautifully.

Overall, I refuse to go anywhere without this now. It is a permanent fixture on the backpack I take on my 'day trips' around town and now that my phone is on a plan that gives it a huge data allocation on 4g within the city limits, I foresee this unit getting a lot of work. Its compact size, stylish design, and light weight make it not only practical but also very attractive to those who don't want to carry an ugly square brick around. It is rugged and didn't flinch when I was trying to adjust it on my belt and accidentally detached it from the clip and dropped it in the gutter full of water. It just kept on doing what it did best, without interruption. What more could you possibly ask for.

The Freeloader Classic is the new star of the solar mobile charging world. Sleek and robust it contains the most cutting edge electronics capable of powering the world's most popular devices including the Apple iPhone and iPad.