« Cloudy with a Chance of Meatballs 2 review 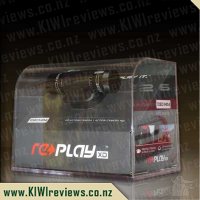 Disclosure StatementFULL DISCLOSURE: A number of units of this product have, at some time, been supplied to KIWIreviews by the company for the purposes of unbiased, independent reviews. No fee was accepted by KIWIreviews or the reviewers themselves - these are genuine, unpaid consumer reviews.
Available:
via Online Store and selected quality electronics stores nationwide.

Replay XD 1080 Mini has been re-engineered and retuned. We took the popular XD1080 HD Camera and the miniature XD720 and combined the best of both. You now get 1080p Full HD video and high resolution photos along with some of the most regarded XD1080 features packed into the smallest and lightest HD camera on the market.

It features high clarity video and audio quality that rival our competitors HD variants. All of this is housed in a stunning and durable aluminium housing.

Whether you prefer racing, off-roading, skydiving, rock climbing, mountain biking, motorcycle riding, surfing, RC cars and planes, hunting or just about any other sport you can imagine, the RePlay XD makes it easy to shoot, share and review your action with a few pushes of a button - all wrapped up in a tiny yet incredibly rugged package the size of your index finger that's easy for anyone to use.

* Recording time may vary depending on compression and storage available.

When you are looking for a tidy, discrete camera that doesn't need fancy gear to make it weatherproof, then you should be looking at the Replay XD. Not much bigger than one of those miniature torches you slip in your purse or back pocket, or even carry as a keyring fob, this little black beauty can give you 1080p High Definition video at 25 or 30 frames per second, or if you want to capture those moments in slower motion, flip it down to 720p and double your frame rate. Great for those moments when something really great is going to happen, like playing paintball and you want to capture the moment of impact as you make that winning point. When you first insert a memory card into the device, it drops a couple of text files onto the card - a configuration script and a timestamp file. You can edit these on your PC to saet the camera up, but really that's a once-off thing and unless you really have drastic changes between shoots, once is enough. Set and forget.

Supplied with a selection of mounting brackets, you can attach it to almost anything. But if you don't want a fixed mounting point, and instead be able to swap it from place to place at need, then you can easily rig up a simple fixing using almost anything at hand. During the recent Wargames Day Out held at the Kingseat Hospital grounds involving Laser Combat Auckland, NZ Airsoft and hosted by Asylum Paintball, I attached the camera to all of the various guns I fired by simply placing the camera up against one of the mounting brackets near the muzzle, and held it there using some extra strong rubber bands! It didn't budge loose, didn't twist, and even survived a few impacts with obstacles without causing the slightest concern.

When it comes to sports cameras, having something with a tonne of features is great... before and after the action that is. During the action, the less you have to interact with it, the better for you. So that's where the design of this unit is brilliant - just two buttons! Power on/off and record start/stop. While you can configure the record button to have some other functionality, there's no real need and keeping it simple is the best policy. Hold the power button for 2 seconds, -buzz-buzz-buzz- and it's on. Press 'record' and -buzz-buzz- it's running, another press and -buzz-buzz- it stops. I really did like the vibration-feedback as it came through my grip on the gun beautifully, telling me what I needed to know without trying to read a screen or decipher some flashing-LED signal while I was busy trying not to get shot.

Under the base cap - where you have your USB and memory card ports, you also have the mode selector switch that allows you to flip between resolutions, and also another that lets you flip the microphone input between the internal mic and an optional external mic that you will need to buy separately. While I can see the benefits of having a mic offset from the point of view of the camera - such as doing a voice-over narration - for the main usage of this, the internal mic is likely to be just fine. It was able to capture surprisingly good sound during our Wargames even.

Image quality is, as expected, pretty top-notch, but what surprised me was the lack of significant image distortion. To get such a wide angle of view, I was expecting some serious fish-eye deformations, but the footage I got was almost perfectly aligned... so either there are some stunningly high-grade optics shoe-horned into this tiny camera, or there is some very high-level image correction software running in there. Likely, there's both. Either way, this saved me a lot of time in distortion-correction, and will make editing the footage a lot easier. Plus it means that anything you shoot is already beyond DVD quality and almost blu-ray ready.

Overall, I was totally impressed. If I had to point out a weakness, I think I would be very hard-pressed to. It would have been nice to have seen a standard stereo microphone input jack on the back, but that would require space I just can't see being found. This baby is PACKED! I know it impressed a lot of the die-hard wargamers I encountered on the day. A few guys were strutting around showing off their GoPro cameras, and going on about how they had created custom mounts to minimise the profile to keep their eye-lines clear during combat... yadda yadda yadda... So it was no surprise they looked at me funny when I said "So, guess I'm not the only one filming today." Many of them looked and looked, but didn't click where *my* camera was... intil I pointed it out... cunningly disguised as a slimline camera held onto my gun barrel by rubber bands!

After I told them about it's features, how it could fit into a standard barrel-mount torch clamp, how it was distortion-free 1080p, weighed almost NOTHING compared to theirs, had twice the battery life, etc... well, let's just say there were a few roosters who stopped strutting around with their combs in the air after that.

Add to that the fact that this is waterproof - without any fancy extra case - and there were a lot of questions about where they could be bought.