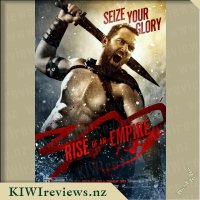 300: Rise of an Empire product reviews This was a bit hit and miss for me. It had a lot of the aspects of it's predecessor that made it great. It had giant battles, gore, sex, and that comic book look. But it just didn't have the same gritty passion that '300' had. As a big fan of the original film, I was disappointed by this film. While good in comparison to the quality of other sequels, as a '300' film, it lacked the punch needed.

There were a lot of references to the original movie, with the return of Xerces (Rodrigo Santoro), Queen Gorgo (Lena Headey), Ephialtes (Andrew Tiernan), and even flashbacks of King Leonidas (Gerard Butler) and Stelios (Michael Fassbender) from the original film. While most would think it is good to remind people that this all occurred in the same universe (I say universe, as I cannot really say these events are a historially accurate representation of greek history), it only served as a constant reminder that this film does not stand up to its predecessor.

As far as plots go, this one was rather convoluted, with occasional truces in battle to allow for fornication between opposing leaders, it really was an odd spectacle to watch. The actual battle tactics however were rather impressive, and that is one thing that stood out as a '300' feature. The tactics and use of local environments that allow the smaller underdog to have the upper hand against a bigger adversary. But again, when this film gained traction they ended the battle for a variety of reasons, ending the build up and excitement.

Eva Green did a great job as Artemisia, and provided the only new character that I was really interested in hearing the backstory for. But the rest of the cast seemed expendable and failed to stick in the memory.

Bastian is a young boy who lives a dreary life being tormented by school bullies. On one such occasion he escapes into a book shop where the old proprieter reveals an ancient story-book to him, which he is warned can be dangerous. Shortly after, he "borrows" the book and begins to read it in the school attic where he is drawn into the mythical land of Fantasia, which desperately needs a hero to save it from destruction.