David Attenborough's Rise of the Animals: Triumph of the Vertebrates review 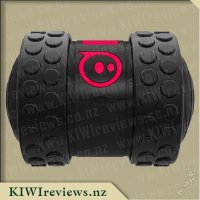 Wicked Fast Racing
Command Darkside from your smartphone or tablet at speeds of up to 14mph. Darkside's durable shell means you don't have to worry about crashing and built-in LED's with customizable settings let you drive at night.

Diabolical Tricks
The Darkside app is built to let you pull off amazing tricks. Command Darkside with the joystick while you use the trick pad to spin, flip and discover hundreds of combinations.

Custom Tires and Hubs
Darkside comes with two sets of removable tires and hubcaps so you can customize its look and performance. Put Darkside's tires on for extra traction and off-road driving or take them off for drifting on smooth surfaces.

SPECIAL EDITION!
Devious. Defiant. Diabolical. Dangerous. Few have the strength to command the dark powers bound within this robot. This is Darkside Ollie - an electrical beast that draws its energy from unrestrained competition and reckless abandon. Command this app-enabled robot with these forces to unleash its unrivaled power. But take heed - the Darkside will overpower anything standing in the way of victory - including its master. You have been warned.

Darkside Ollie rolls at speeds of up to 14 mph and connects instantly to your device via Bluetooth SMART with a range of up to 100 feet. Turn on a dime with Nubby Tires or take them off to drift like a street racer. Darkside also comes with a bonus set of Turbo Tires and Flux Hubs so you can customize performance. Powered by USB charging, Darkside's LED's glow in customizable colors as it spins, drifts and flips with app-powered tricks.

Yonks ago, I saw the first generation of "Sphero Balls" in action at the Armageddon Expo in Auckland. I thought it was a fun little novelty, but not really my thing - mainly because I kept losing track of it in my mental compass, and driving it in the wrong direction. Not a good idea with hundreds of people walking around trying not to stomp on it. I kinda stopped paying attention to it after that. However, recently I became aware of the newest member of the Sphero family - the Ollie, and it's "dark cousin" the Darkside Ollie. This, I wanted to know more about.

This is a two-wheeled, glowing, hell-bent madness machine that will appeal to anyone who loves to see small things move fast. Pulling insane stunts thanks to some built-in "short-cuts" and a bit of creative driving, this is a great toy to while away a few hours of down-time. I actually found it strangely relaxing, almost meditative, working out how to make it perform stunts that almost seem to defy logic and the laws of physics. One of my accidentally-discovered favourites was getting it to stand on one end and spin like a top!

The default boxed kit gives you the main Ollie, a USB micro charger cable (No wall adaptor though), two sets of tyres - indoors and basic outdoors - plus two sets of hubs. You can mix'n'match the tyres and hubs, and each combination will create a different balance dynamic in the unit as it drives, so some stunts will be easier to trick-off if you have a certain combination in play. What can be fun is to have different hubs at either end - this creates a slightly different balance depending on whether you are pulling a high-speed turn left or right, meaning turning one way makes it slightly more unstable - thus tricks come easier - while turning the other way the unit won't unbalance so much, giving it more surface grip.

Some of the stunts seem to throw the unit around a bit, which gave me a few anxious moments when I had it outdoors on asphalt, but it survived remarkably well, and hey, a few scratches just adds character and show it's being played with. Still, these high-energy stunts can throw off it's inertial compass, meaning that you should always be alert for the need to recalibrate it. Thankfully, this is a very simple process and the app even talks you through it. Warning though, due to a strange interface design, it can be easy to accidentally switch out of re-orientation mode, because the "grab handle" starts off almost directly overlapping the re-orientation on-off button. Just a little thing really, but it's the little things that can cause the most consumer frustration. Pro Tip: The "grab handle" is only a guide, you can 'grab' the turning circle at any point, so just avoid the triangular button.

One of the biggest things to remember is that this nutty thing can be configured in so many ways. Be sure to explore the settings menu every chance you get. You can set how tight it turns - sharp to drift - and also pre-define the environment - in a room, or a large open space - and a number of other factors, including the colour of the light show! Presets are loaded, or you can customise the glow to your own favourite colour. #TealRules

Want more accessories? Not a problem! A quick online search will reveal a number of optional add-ons, from high-grip all-terrain tyres, to an online design service that allows you to craft 3d-printable body kits - hubs, chassis covers and even clip-on "crowns" that clip over the light panels. The site offers you the option of sending the order through to a professional 3d printing bureau to be delivered to you, or to download suitable files to allow you to print your own - if you have access to a quality 3d printer.

Battery life was a little erratic and hard to narrow down - different stunts can drain the battery at different rates. You may also find that your phone/tablet battery starts to empty out faster than expected, so be sure to keep an eye on that too. Still, recharging doesn't take a huge amount of time - around 90-120 minutes depending on just how run-down it is - and from a full charge you should get 60-70 minutes of fair playtime, 35-50 minutes if you hammer it hard-out on maximum-performance settings.

Overall, while I think this is definitely an uber-geeks' toy, it's a sure hit for the Christmas Prezzie list for any geek-in-training. I also had a teenager and a 7yr old play-test it with me and they both agreed it was a hoot. If you have the funds to spare, and want something neat, this is a good one to consider. Apps are available for iOS and Android, and they both seemed to work equally as well, if you overlook the "re-orientation annoyance" design glitch.

Round out your N-Strike arsenal with this awesome Raider Rapid Fire CS-35 blaster and its special drum magazine!

Giving it the highest dart capacity yet, the drum magazine hold 35 darts and features a clear window to let you know when your ammo is getting low. A pump-action handle lets you control your rate of fire and choose your blasting mode - either single or rapid-shot! Add to that its adjustable ... more...