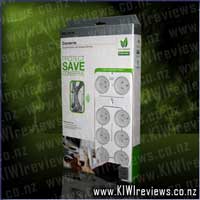 Disclosure StatementFULL DISCLOSURE: A number of units of this product have, at some time, been supplied to KIWIreviews by the company for the purposes of unbiased, independent reviews. No fee was accepted by KIWIreviews or the reviewers themselves - these are genuine, unpaid consumer reviews.
Available:
at qualitry retailers

Most home electronics continue to use energy, even when you've turned them off. This wasted energy is known as Standby Power, which adds up fast. Standby Power impacts not only the environment, but also your electricity bill, as it can account for up to 10% of your household power consumption.

Belkin's Conserve Energy-Saving Surge Protector conveniently minimizes standby power by enabling you to turn off the power to multiple devices with just one click of the remote switch. The remote switch easily cuts off or activates the power that flows to devices plugged into Conserve's Switchable outlets, while devices such as DVRs or Routers can be plugged into the Always-On outlets, since they require a continuous power supply.

Saving money and saving energy has never been easier.

With a huge extended family, any of whom could drop around without notice with kids of any/all ages in tow, something like this was exactly what I have been looking for!
Some of the smaller ones have just worked out how to turn the TV, DVD player and/or Playstation on by themselves, and make a great game out of seeing who can get a picture and sound to appear the fastest.
As you can imagine, this is n ot only a hazard to the life-expectancy of my gear, but also a potential health hazard to the kids. So something that allows me to remotely shut it all down, without cutting off my cordless phone and internet connection is a real bonus in my books!
As well as having the tweo always-on ports and the 6 switchable ports, the features that really impressed me were the ability to 'change channels' for the remotre, allowing me to either control all boards with one remote (assuming I had more than one of these, that is) or lock certain boards to key remotes, say, one per room, or one for vital stuff and one for casual switching. (Such as having just one board for the lounge, while the rest of the house would be slaved to a second remote.)
I was also taken by the phone ports on the end, allowing me to plug one line in, but take two surge-protected lines out. The clip-on cable-tidy was also really cute, and impressive in it's simplicity and effectiveness.
Now, the only downside for me was that the remote I had tested was an ex-demo model, and had probably been thrashed to death during demos, so the battery in the remote went flat after only a few days of use. This makes it hard for me to give any indication of the battery life expectancy, but I'm working on that. The remote uses a very unusual battery I haven't seen before, and haven't seen in supermarket "battery centre" stands either. I did managed to track a couple down to a local electronics store but they were quoting some scary numbers at me for pricing. I think they might have been trying to give me their fax number instead, at least I hope that was the case!
Thankfully, the smarty-brains at Belkin had thought of this, and included a manual switch on the multiboard itself, so at present it is acting like a regular 8-way multiboard. Once I have a new battery, I can go back to protecting my gear against power surges, and curious little fingers.
All in all, if you have ever wanted to save power, and wondered where it has all been going, turn your lights off in the house and see if it looks like a Christmas Tree with all the power indicators around you. If so, you SO need one, or more, of these boards!

Most home electronics continue to use energy, even when you've turned them off. This wasted energy is known as Standby Power, which adds up fast. Standby Power impacts not only the environment, but also your electricity bill, as it can account for up to 10% of your household power consumption.