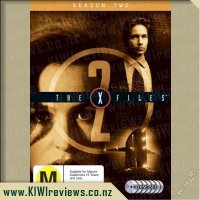 Fresh off Season One I jumped on into Season Two (The Zone is playing the entire series) and so there was no need to try and remember where we had left off the previous season.

At the start, the X-Files have been shut down and Mudler and Scully reassigned, we're also intrduced to another key character, Krychek. Without giving too much away, Scully is gone for a couple of episodes (due to needing to work around Anderson's pregnancy and maternity leave), and whilst I did find her coping of the events well done, I did start to feel a bit of "Oh, poor Scully, here it goes again, she's got no luck this season..." but Anderson does a great job of showing the vulnerability when needed but also the strong front necessary in her job.

Now, it may just be me but I found Duchovny's acting, well, not the greatest in quite a few moments in this season and him in the season finale... refilm please! The enigma that is the smoking man was always well done, so little time spent on the screen but so well scripted and acted that you know without a doubt that he's always behind the scenes in some way or another. Humbug was a favorite episode of mine in this season, and moment of trivia from the speical features.... Anderson really did put a bug in her mouth! Kudos to her!

This had some good episodes in it, though I did find that after a big event for Scully, she was placed in mortal danger a few too many times, but overall it has never had me wanting to stop watching the show.

The inspirational story of New Zealands greatest-ever day at the Olympics comes the true story of three misfits whose lives connected one glorious hour in Rome on 1 September, 1960.

THE GOLDEN HOUR is a documentary-drama in the style of TOUCHING THE VOID which recounts what is one of New Zealand sports greatest ever moments.

Based on the true-life heroics of iconic New Zealand Olympians and runners Peter Snell and Murray ... more...