« Night of the Hawk review 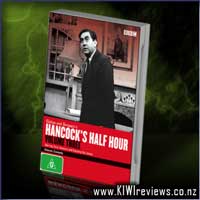 Hancock's Half Hour could be described as the yardstick against which all subsequent British sitcoms have been measured. Based on his famous radio show of the same name, the TV show made Tony Hancock Britain's leading comic of the day.

Written by Ray Galton and Alan Simpson, regular guests on the show included comic greats like Sid James, Hattie Jacques and Kenneth Williams and his fans included comedy greats and famous Goons Spike Milligan and Harry Secombe. Hancock's performing days started when he volunteered for the RAF and became part of the Gang Shows who were sent round to the many war zones to entertain the troops. After the war, his first real break was at the infamous Windmill Theatre where comedians were hired to entertain the audience between the nude reviews. Eventually his stage work came to the attention of the BBC and he was given a spot on Variety Bandbox in 1949. From then on, his career steadily grew and his successful radio and television shows spoke for themselves.

Hancock fans everywhere will be rejoicing that the BBC have decided to release yet another volume of Hancock.

But wait - in the last two volumes, you got a single disk; in this volume, you have two. Clearly the BBC have been under pressure to release more and more of the comic genius that is Hancock, and the sharp comic scripts of Galton and Simpson, that they have given in to keep us in stitches for a while yet.

The unique feature of the scripts of Galton and Simpson is that they are timeless. They are almost as topical today as they were when first written, and just as funny. For fans of Galton and Simpson, do read Spike and Co for more insight into the comic pair, and the soon to be reviewed "Steptoe and Son". You will not be disappointed with either acquisition.

Back to Hancock. He is one of the reasons this series is so funny. Paul Merton tried to replicate Hancock's success in a recent remake of some of the Galton and Simpson scripts - but failed miserably in his delivery. Hancock (accompanied by Sid James and many other top comedians and actors of the day) had perfect comic timing. Also, written the 1940s and 1950s meant all the humour was good clean fun. Not even a swearword in any form would have got past the censors and to be honest, the scripts are funnier without the smutty humour. Only a slight innuendo is present and that just sails well above the kids' heads. If only more comedy today could be this well-written and appeal to the whole family.

But when, I ask, can we see volumes four, five and six? Ok, so I am greedy - but who can blame me?

The Stargate is an intergalactic gateway developed by an ancient civilisation, that links other planets from other solar systems to ours. The U.S. Air Force assembles a Stargate team headed by Colonel Jack O'Neill (Richard Dean Anderson, a.k.a. MacGyver) for interstellar peace-keeping missions. Boasting incredible special effects sequences, rapid fire pacing and awesome scenes of alien warfare, Stargate SG1 is your gateway to pulse-pounding sci-fi action! This DVD box set features the complete episodes from Season One of Stargate SG1 across 5 discs.