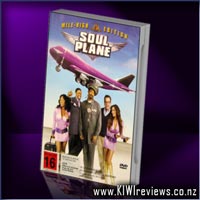 After a humiliating experience on an airplane, Nashawn Wade sues the airline and is awarded a huge settlement. Determined to make good with the money, Nashawn creates the full service airline of his dreams, complete with sexy stewardesses, funky music, a hot onboard dance club, and a bathroom attendant.

This movie for me was an absolute great!!! The humour is definately tailored to my type of personality. From start to finish this movie had me in fits of Laughter with appearances from some of hip hop's greats (Snoop Dogg, Method Man, Lil John and the Yin Yang Twins). Its a hip hop lovers ideal movie.

So if you hit the video store on Friday night (or any night for that matter) dont just pass Soul Plane by, give it a twirl!!!

This is the Mac Daddy of Hip-Hop Affirmative Blacktion movies... and I loved it. That really surprised me, because ever since Soul Man, such movies have given me the shudders. With a star cast, including Snoop Dogg, Tom Arnold, Carmen Electra, and a few more that I recognise faces but not names, this is not some cheap-budget B-grade flick... despite some of the sub-standard special effects, though fewer than I expected actually.

The plot summary is thus, lead character Nashawn Wade has an 'incident' while flying, and sues the airline. When the jury award him a staggering us$100,000,000 payout, instead of following his cousin's advice to blow it all gambling and womanising, he sets up his dream airline, NWA, with a bright Royal Purple aircraft, fitted with 84-inch spinners (Hubs that have an extra set of bearings, allowing the chromed faceplate to continue spinning while the wheel is not), a First Class section that includes huge white leather couches, hostesses with mini-miniskirts, gourmet dinners, a huge spa pool and even a kickin' nightclub... and then there's 'Low Class', where the passengers are crammed in like penned sheep, the overhead lockers have keys and are coin-operated (such as those in a train station or bus depot), the meals are boxes of fried chicken ("Take a breast, or a wing and drumstick, and pass the box on... Hey! Don't be greedy, just one piece!") and the drinks are watered down beer or weak soda... classic!

With many a spoof-take of other movies, a stoned pilot who got his wings "...when I got out of prison... I flew the simulators...", a co-pilot from Africa who has bags of mushrooms with him at all times "...to take care of the itchings, down there, you know..." and a flight engineer who is more interested in playing Xbox on the aviation screens... it all adds up to almost an hour and a half of laughter. There is even a romantic tragedy hidden in the plot, though it too has it's comedic moments.

Overall, it doesn't really matter if you like Hip-Hop Comedy or not, this movie will have something to appeal. It's not everyone's cuppa tea, but it sure took me by surprise, and I have no regrets in watching it... in fact, I get the feeling it's going to be off the shelf plenty more times. However, with flashes of nudity, and explicit language and descriptions of sexual activities, this has a well-earned R-16 rating. It is NOT for the kids.

From acclaimed filmmakers Lana Wachowski, Tom Tykwer, and Andy Wachowski, the powerful and inspiring epic drama "cloud atlas" explores how the actions and consequences of individual lives impact one another throughout the past, the present and the future.

Action, mystery and romance weave dramatically through the story as one soul is shaped from a killer into a hero, and a single act of kindness ripples across centuries to inspire a revolution in the distant future.