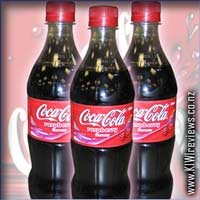 The Coca-Cola Company has released several flavor extensions of its signature brands -- from cherry Coke ® to Diet Coke with Lime ® -- in markets around the world. Many New Zealanders enjoy adding a shot of raspberry syrup to their Coca-Cola in convenience stores and quick-serve restaurants, and the Company has taken notice.

The Coca-Cola New Zealand team did not have to look far for inspiration. They observed behavior at self-serve soda fountains, where consumers can make the choice themselves.

The Company tested a range of flavors with Coca-Cola, yet raspberry was the clear favorite.

The fact that the raspberry experience was already occurring in-market and the New Zealand market embraces innovation made it the obvious choice. New Zealand serves as a good test market for the Company -- though relatively small, it offers many elements of larger Western markets. New Zealanders (or Kiwis, as they are affectionately called) have a strong affinity for the Coca-Cola brand and are known as early adopters of new products.

The new extension joins vanilla in both brand families and will replace Diet Coke with Lime.

When coca-cola announced that they were bringing out raspberry coke I was so happy to hear of this, like many other people appeared to be. It was one of those drinks you loved but could only make yourself due to it not being out in the market, so whenever I would go out to burger king I would get my soft drink cup from the checkout and go over to the soft drink machine and full my cup with equal amounts of schweppes raspberry fizzy and coke, this provided just the right mix and the perfect drink of raspberry coke.

Being a fan of coke and having enjoyed other special edition coke combinations that had been brought out in the past vanilla coke and cherry coke, I was rather dissapointed in the taste of the raspberry finding it very artificial and the taste subtle and hardly there, not the strong sweet raspberry taste I had been expecting. The other thing I found with this drink was that it didn't seem to have the same fizz factor of the normal coke products which was a real shame.

I wouldn't recommend the raspberry coke, though I am sure it has been discontinued over in New Zealand now? However if coca-cola was to bring out a new improved raspberry coke I would most definetely give it another go.

I bought this for my daughter, she doesn't actually like coke but she likes raspberry so I thought she might like this but it was a definite no this is gross reaction!

I too was excited when coca-cola released their raspberry and coke here in New Zealand, but like the other reviewers it was such a disappointment. The coke flavor is evident and strong, and the smell of raspberry is definitely there...but when it comes to taste...nothing! its just like drinking a not so strong normal coke. Such a disappointment considering it is supposed to be 50/50

Sorry coca-cola you missed the boat on this one.

hmmmm I too was excited when I saw the raspberry coke come out! I despise vanilla coke and lemon but have very fond memories of the special trips to the country club or pub and being allowed to sit and enjoy a coke filled with sweet delicious raspberry syrup.....opening the bottle I was taken back by the scent, however came crashing back to earth once I'd taken a sip! Where's the raspberry? if you close your eyes and try realllllly hard you can JUST get it, but then its gone, taken over by an insipid aftertaste.
I honestly struggle to recommend this to others who have fond memories of the rasp/coke from yesteryear...

I have to completely agree with past reviewers regarding Raspberry Coke. I had really been looking forward to this one. I loved the lemon Coke, Cherry Coke and Vanilla Coke. And I also had a childhood filled of pub visit memories that sometimes involved lemonade with raspberry syrup or Coke with raspberry syrup. Delicious!

It was also my favourite thing to do at Burger King - mix a 50/50 Raspberry Coke! Awesome Sauce.

So when I cracked this open and took a swig, I was sorely disappointed. The taste of raspberry was sooo subtle I could hardly taste it. When I had swallowed and allowed the taste to settle in my mouth, I was horrified by the deeply chemical after taste that accompanied the Raspberry flavour. Why, I lamented, could they not have used the good ol Raspberry syrup of my youth. But they hadn't and as a result, I sadly downed the bottle (couldnt bring myself to waste drink) and vowed never to buy this again. For all they get right though, I couldnt be too angry about this miss.

I am a huge coke fan so was excited about the idea of raspberry flavoured coke...Heaven!! It bought back so many memories from raspberry and coke being the drink I was allowed when I was out with my parents, it was such a treat.

I was sorely disappointed, the taste was very artificial and it left a bad after taste. There was nothing appealing about this which is a real shame.

Thankfully I still have my diet coke and my memories :)

I agree with recent reviewers. This is one experience that you probably want to miss. My advise to Coca Cola is not to mess too much with a recipe that is already successful. I vote for classic coke every time!

I love drinking raspberry and coke at bars and fast food outlets, so thought i would buy a bottle of raspberry coke. It was foul!! It tasted nothing like what i brought elsewhere. Wouldn't waste my money on buying this again.

Like the first reviewer, I found this to be completely artificial tasting. I liken the taste to cough medicine.

This is definately one that you only want to try once. The taste is like bumblegum and has no similarity at all to the much favoured mix of coke and rasperry that you buy from any restaurant or bar. Like all versions of Coca Cola you have to try it once, but like most it's one that I won't be rushing away and buying again.

Being one of those 'Kiwis' that likes to add some Raspberry flavouring to my Coke whenever possible I greeted this new innovation with great enthusiasim, however that quickly faded with my first taste of this beverage.

Fistly I found the taste to be quite artificial and not quite strong enough for my taste. As quoted to my by another taster of this product 'It tastes like they have added perfume'. Now I wasn't going to ask how they knew what perfume tasted like, but that quote did seem to sum up the taste somewhat.

This is one variation of coke I won't be in a hurry to purchase again, unless they modify the formula a bit.

Switchel is the perfect refreshment for the hotter weather. The apple cider vinegar in Switchel boosts immunity and helps your digestive health. It restores electrolytes and helps ease pain and inflammation.