ProdID: 571 - The Hitchhiker's Guide to the Galaxy
Directed by Garth Jennings 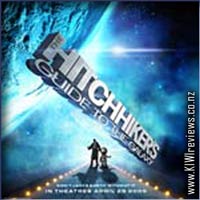 The Hitchhiker's Guide to the Galaxy product reviews

Everyone has bad mornings. You wake up late, you stub your toe, you burn the toast...but for a man named Arthur Dent, this goes far beyond a bad day. When he learns that a friend of his is actually an alien with advanced knowledge of Earth's impending destruction, he is transported off the Earth seconds before it is exploded to make way for a new hyperspace motorway. And as if that's not enough, throw in being wanted by the police, Earth II, an insane electronic encyclopedia, no tea whatsoever, a chronically depressed robot and the search for the meaning of life, and you've got the greatest adventure off Earth.

"If we could just change one thing, we would all have learnt to sing" - I love this song, So Long and Thanks for All the Fish, right a the start and have great fun singing it again and again.

I went and saw this when it first came out, tagging along with my mum. She had read all the books and I had not at the time. Going into this I was expecting a fun movie and that was what I got. I enjoyed it so much that I bought a copy and then almost bought a second one since my friend had borrowed mine for far too long.

I found this to have quite a few good laughs, and I would love to have the gun that they search off to get, so that others could know how I really feel deep down. I thought that the actors were fab, Bill Nighy is one of my top ten actors and I loved Alan Rickman as the very depressed Marvin.

Stop - don't waste your time with this movie, if you want true hitchhikers style reread the books for the 50th time. Seriously.
I liked Alan Rickman as Marvin, and Bill Nighy. Fullstop.

I'm fairly sure my ten year old son assembled the rest of the movie.
Special effects - sad.
Plot - only good because it was Douglas Adams.
Casting choices - barring one or two exceptions (namely Alan Rickman and Bill Nighy) laughable.
Overall movie - ask for your money back

After seeing the original TV series many years ago, and the numerous repeats, it was with some trepidation I heard of this cinematic remake. After seeing the shorts, I knew it wasn't a patch on the original... so wasn't expecting much when I went to see it. Mainly, I was there to see how badly it had been butchered.

OK, let's try 'things that could be mentioned without killing the movie' instead... Bill Nighy, memorable for his rendition of an aging rock-star trying to stay Hip in Love, Actually, did a pretty good rendition of Slartibartfast, Fjordmeister extraordinaire. He carried it off with almost the right aire of confused genius, I thought. Alan Rickman's voicing of Marvin was pretty good, and did indeed have a convincing timbre of depression... that rough-edged voice of his has it's place... incidentally he was also in Love Actually.

OK, what were the downsides... well, the creature effects were HORRIBLE! The Muppet Show had better it's in days! Seseame Street would have been more convincing. Agreed, the Vogons were pathetic. The Babelfish was ridiculous, looking more like a constipated goldfish crossed with a hamster! Marvin was, annoyingly, quite well designed to match the ship... they both looked like the illegitimate offspring of a mating between a quantum particle accelerator and a goldfish bowl.

In general the special effects really only impressed when it came to Magrathea's 'factory floor' scenes... even the gratuitous image of Douglas Adams' face as a planet.

However, such scenes as the Heart of Gold (spaceship) transforming during Infinite Improbability Drive was so rough, it looked like it was done in Macromedia Freehand!

A bit of trivia: this was the ninth incarnation of tHHGttG, it has been, in no particular order: a radio series, a record album, a novel, a television series, a computer game, a stage show, a comic book and a towel. John Malkovich's character Humma Kavula, a religious leader, was created especially for the movie by Douglas Adams. Why, I am still not sure exactly why, because Humma was pointless... although I did laugh at the 'Bless You' line.

Overall, this movie was an OK laugh, and fine enough as a total comedy spoof... but if you have read the books or seen the TV series, I recommend you avoid this one. It's just not up to par really.

This movie is an amazing tribute to one of the top sci-fi comic writers of our time......... NOT!

I didn't go into this movie expecting a complete duplicate of the book or of the TV Series as it is just absolutely impossible to fit all that information into 115 minutes or movie (even with an infinite improbability drive), but I was not expecting to see the absolute drivel they had the audacity to call 'The Hitchhikers Guide to the Galaxy.

First off the casting of most of the characters is a complete shambles, Martin Freeman plays Arthur as a wimpy, whinging Pom, Ford Prefect is obviously based on someone who spent alot of time in the Betty Ford Clinic and Sam Rockwell's 'Zaphod Beeblebrox' is not a zany slighty egotistical and excentric guy, but instead seems to be psychotic, schizophrenic and just plain up himself.

Next i'll delve into the amazing special effects in this film, or rather the almost complete lack thereof. The Vogons look like guys dressed in large rubber costumes, the graphics of the 'Guide' look as if they were done by young children, and the 'Heart of Gold' looked like something my cat would play with.

Although there are three redeeming features of this movie.


All in all not one i'll be adding to my collection and definately not one I was happy to have paid full price to go and see.

Join in the fun as arrogant Emperor Kuzco is turned into a llama by his devious adviser, Yzma, and her hunky henchman, Kronk, who want to rid the kingdom of his rule. Now this emperor ... more...