ProdID: 5919 - The Wolf of Wall Street
Directed by Martin Scorsese 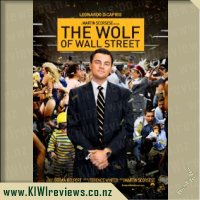 Based on the true story of Jordan Belfort, from his rise to a wealthy stock-broker living the high life to his fall involving crime, corruption and the federal government.

DiCaprio plays Belfort, a Long Island penny stockbroker who served 36 months in prison for defrauding investors in a massive 1990s securities scam that involved widespread corruption on Wall Street and in the corporate banking world, including shoe designer Steve Madden.

With so much ozcar buzz over this movie, it was definitely one we wanted to see. Unfortunately the movie I had made up in my head was better than what I watched on the big screen. If you are easily offended I would stay away from this movie. I am pretty sure I read that it has the most swear words of any movie yet made. Basically the movie is about drugs, sex with partners/prostitutes/group, drugs, a bit to do with the share market and did I mention drugs?

I am not easily offended and very rarely I turn my head away (unless it has to do with snakes) but there is a scene about five minutes into the movie which involved 'a straw, drugs and a bottom'. It actually made me feel ill. For a movie that is just shy of three hours there really was not a lot going on if you took away the swearing, drug taking and sex.

Apparently the movie is about the share market - but when Leonardo started giving explanations about what he was actually doing I got completely lost. He had this rapid speech going on and was using so much 'share market jargon' that it just lost me. But really the movie didn't focus too much on the business side, more the fun of his life.

This is the true story of Jordan Belfort and after watching it I am not sure how to feel about him. He defrauded a lot of people of millions of dollars and lived the high life with all that money can buy. He went to prison for 22mths and looked more like a holiday camp with scenes of him playing tennis. All I can think is I really hope he has an Aids test if the movie is anything to go by.