Use of Weapons review 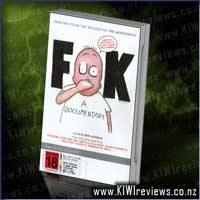 A definitive look at the infamous expletive, F#ck explores how this word, still widely seen as obscene, permeates every aspect of our culture - from Hollywood to the schoolyard, to the houses of government, scholars and linguists examine its long and colourful history; comedians, actors and writers defend their Constitutional right to use it. Even people who do it for a living are interviewed, all to discover what it is about this one syllable that polarizes opinions.

Yes, the F-word... feared and loathed throughout the ages... and why? No-one knows it's true origins, despite many theories... no-one is absolutely certain as to it's original meanings, despite it's colloquial use these days, and even though it has almost made it into daily common speech, it is still thought of as probably the worst word in the entire language.

Ah, but how versatile, how dynamic, how multitudenous the word is... be it a verb, a noun, pronoun, adjective... this one word has a place, a use, a function. No other word can allow one to express frustration, astonishment, delight, awe, fear and anger in quite the same way. Truely, this one word is the swiss army-knife of the english vocabulary...

In this wonderful 93-minute documentary, we hear from historians, crackpots, comedians, puritans, the liberals and the democrats of the world, who each have a different spin on the word, and it's place in our world. Of course, where would be be without the shocking stylings of Billy Connolly, the bearded wierdie willy of the comedic stage... Kevin Smith, director os such hit movies as "Clerks", "Mallrats" and "Dogma"... Drew Carey, the American attempt at British wit, and Hunter S. Thompson, druggie, author, and inspiration. There's even an appearance by Ron Jeremy... if you know what he's famous for, you'll know why I can't really go on about him.

Overall, there were places I was fascinated by the historical evidence of it's origins, places where I was trying to hold my poor aching ribs together, even parts I was offended by... and it's all good. Let's face it, no matter which side of the fence you are on, when you watch an objective, both-points-of-view documentary, you SHOULD be offended by parts of it, when they contradict your moral senses. So I am really happy to say I was equally amused, entertained, informed and outraged by this doco... and that's what makes it a winner. It really does show us so many points of view. Some agreeable, some not. NOT for little eyes and ears though, by any means. The R18 sticker is there for a reason... not so much for what gets heard, as seen.