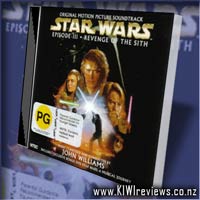 NOTE: May come with a bonus DVD, Star Wars: A Musical Journey

If you haven't yet been to see the movie, you really should before you contemplate the soundtrack. Now don't misunderstand, I am not saying you'll find the soundtrack disappointing, far from it, however I listened to the soundtrack first, and it was good, but after seeing the movie, listening to the soundtrack became great! I could 'see' the various scenes replaying as the music filled to room. It's just that clear.

John Williams has had the honour, and the skill, to do the musical score for the entire saga, 6 movies worth... and his music is a musical tale that can transport you back to the galaxy far away in a time long ago... it's just too difficult to express in mere words. I have heard all 6 soundtracks now, but have only been able to get one soundtrack to keep, this one. It's a shame really, because his music is so stunningly evocative.

Overall, if you enjoyed any of the Star Wars movies, you should seek out and buy the soundtracks. You won't regret it at all. Especially as this edition at least, comes with a bonus DVD that gives you an audio and video timeline of the Skywalker Saga, from Phantom Menace right through to Return of the Jedi. The soundtracks for movies 4-6 (the 'classic' trilogy) are available in a collectors boxed set, and I dare say that if you are patient, you'll be able to get the soundtracks for movies 1-3 (the 'modern' trilogy) in a similar boxed set eventually... but why wait, go out and get them now so you can enjoy them that much longer.

Villainy are set to release their second album DEAD SIGHT on September 18. The album features the lead single Safe Passage and the brutal taster Syria.