Triad of Being : 2 : The Universe Parallel review 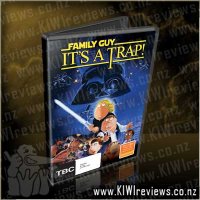 In this spectacular and offensively uproarious final chapter of the Family Guy take-off of the Star Wars Trilogy, Luke Skywalker (Chris) and Princess Leia (Lois) must travel to Tatooine to free Han Solo (Peter) by infiltrating the wretched stronghold of Jabba the Hutt (Joe), the galaxy's most loathsome and dreadful gangster.

Meanwhile the Emperor (Carter Pewterschmidt) and Darth Vader (Stewie) conspire to turn Luke to the dark side, and young Skywalker is determined to rekindle the spirit of the Jedi within his father. The Galactic Civil War has never been more outrageous, as the Rebel forces gather to attack the seemingly defenceless and incomplete second Death Star in the battle that will determine the fate of the galaxy.

Family Guys isn't afraid to tell the story like it is. Even in the opening scenes they mention how they didn't really want to do another Star Wars movie, but the company just kept on throwing money at them demanding it be done, so I guess I can understand the result.

Unlike the first parody film, Blue Harvest (and to a lesser extent, the second film, Something, Something, Something, Dark Side), the final installment follows the original film very closely, with just a few fart jokes added in. Unlike the other Family Guy films that would often break the 4th wall to point out inaccuracies and weird facts about the actual Star Wars films, this was just a portrayal with Family Guy characters, and really wasn't all that funny.

I purchased this film purely to complete the collection, but it failed to impress me. The fact that Family Guy is now all computer generated meant that the animation can no longer really be considered impressive, as it now falls under average CGI, so the plot really needed to step up. But instead, it did the opposite.

It's good for a watch, but not something I can watch over and over again, so it fails to have the same charm that the television series has.

I normally enjoy watching Family Guy. The humour, although decidedly American (not English!), is up to scratch and full of the 'non-sequitur' style of humour as typified by Family Guy.

The extended special version that parodied the Star-Wars genre had something missing for me - some of the non-sequitur 'sub-scenes' fell a bit flat, some were aimed very much at the American audience and you'd have to be American to understand it; other areas of humour just seemed a little contrived; but there were plenty of moments of 'laugh out loud humour' to make sure you stay watching - overall, it was a fun way to spend an hour.

I wouldn't say this was a fail for me, but it wasn't a 10/10 win either. I know my younger brother-in-law will be wanting to get his hands on this DVD and I know he will enjoy it.

The Family Guy series has long been known for it's wonderfully funny and brilliant parodies of the first two films of George Lucas's original Star Wars Trilogy, and now they are back for the final episode.

Whilst I haven't see the two previous parodies, I have seen a number of Family Guy episodes, and whilst this was a good watch, I felt it seemed to lack something when compared to the comedy of the TV show.

One thing which I did enjoy was the inclusion of some of characters from some of Seth McFarlane's other shows such as American Dad and The Cleveland Show.

The plot is pretty close to that of the actual 'Return of the Jedi' movie, just with some well thought out moments of comedy genius (and some not so genius moments as well).

As is common with the Family Guy TV series expect a bit of profanity to be present for the cheap laugh.

All up it was a good enough way to spend an hour.

Light-stepping around sensitive topics, social and political correctness, avoidance of the taboo.

None of these terms may be applied to Family Guy. If the topic exists, no matter how touchy, Family Guy will touch it. Normally in an inappropriate fashion. But that is what gives this show its edge.

In this latest release, Family Guy targets another episode of Star Wars. Remixed and redone, this episode will have you rolling on the floor. Although I live in a different country from the creators, resulting in the inability to understand some jokes about named people. I thoroughly enjoyed this show. Not overly suitable for the younger audience (parental guidance is advised), some of the language can get quite mature. But if laughter is on your menu, I personally believe you will eat this up.

Kudos and three thumbs up to the cast and crew of this production, I wish much more success and future creations. Keep up the great work.

Scrat's epic pursuit of the elusive acorn catapults him into the universe where he accidentally sets off a series of cosmic events that transform and threaten the Ice Age World.

To save themselves, Sid, Manny, Diego, and the rest of the herd must leave their home and embark on a quest full of comedy and adventure, travelling to exotic new lands and encountering a host of colorful new characters.