« How to Train Your Dragon 2 review

ProdID: 6424 - Wyrmwood - Road of the Dead
Directed by Kiah Roache-Turner 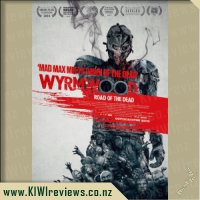 A survivor (Jay Gallagher) of a zombie plague prepares to slash his way through a horde of sinister soldiers and ravenous monsters to rescue his kidnapped sister (Bianca Bradey). Ah yes I do enjoy a good zombie film, though the cinemas have been rather saturated with the genre as of late. As it says on the DVD cover, the movie is pretty well described as a combination of "Mad Max" and "Dawn of the Dead". In this film you will find an ordinary world (Australia) plunged into a scenario that is dominated by zombies, but this movie is a lot more...mobile. The worlds vehicles, however, no longer work, so some pretty inventive alterations are needed (one could almost mistake this as a kiwi film, if not for the accents).

There are only two main differences to the zombies in this film, as these differences are the only real reason as to why the film exists, and the plot is firmly based around these new attributes, and luckily as this is a zombie film, science can be damned near ignored.

But it was a reasonably fun film, even if a little pointless. There are no real goals to this film, beyond finding family and seeking vengeance, but it still provided entertainment, and plenty of gory deaths. The acting is rather average, but it improves as the film progresses. Bianca Bradey provides the more interesting half of the plot, and certainly provides something pleasing to the eye, perhaps providing a bit of a "Resident Evil" vibe too.

Score: 8.0
Product reviews for listing 5743: Any Given Sunday
Directed by Oliver Stone

Life is a contact sport and football is life when three-time academy award-winning filmmaker Oliver Stone and a dynamic acting ensemble explore the fortunes of the Miami Sharks in Any Given Sunday. At the 50-year line of this gridiron cosmos is Al Pacino as Tony D'Amato, the embattled Sharks coach facing a full-on blitz of team strife plus a new, marketing-savvy sharks owner (Cameron Diaz) who's sure Tony is way too old school. An ... more...