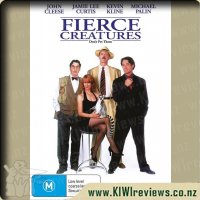 In an attempt to catch lightning in a bottle, Monty Python veteran John Cleese wrote this slapstick farce for the purpose of reuniting the comedic cast of A Fish Called Wanda. Fierce Creatures is all about a media mogul (Kevin Kline) who owns a London zoo. He demands that the park raise more profit, so the new zoo director (Cleese) orders that only dangerous animals be displayed in order to maximize ticket sales. In a dual role, Kline also plays the mogul's son, who plans to run the zoo with the help of displaced employees (including Michael Palin) and zoo programmer Willa Weston (Jamie Lee Curtis).

Fierce Creatures is a fun movie, if you liked A Fish Called Wanda then you'll enjoy this (so long as you don't sit there comparing them).

Cleese stars as an ex-cop who is hired by a huge Rupert Murdoch-like conglomerate to run an English zoo that they have picked up in a mergers acquisition which they are willing to keep it going if it can return a profit at a certain rate. Cleese plans to do this is by appealing to people's blood lust by only keeping the most dangerous and fearsome of the animals. Things change though when Jamie Lee Curtis and Kevin Kline show up to take over Cleese's job (but keep him on as an employee). A brainstorm by Kline introduces the notion of corporate sponsorship into the zoo-going experience, all the while a budding romance between Cleese and Curtis is playing out behind the scenes, and the two eventually join forces to try and save the zoo from the clutches of the crass and evil conglomerate.

The only issue that I have with the movie is how it keeps changing direction every thirty minutes but can concede that it does add to the humorous nature of the movie. The scenes of the kindly zoo keepers trying to sell their animals as dangerous is one of the funniest scenes in the movie, the scene where Cleese is on the phone and he has those he's talking to thinking he's got several women in his bed when he's actually got the various animals in his bed. The acting is great and Kline really steals the show in a dual role, as the Murdoch-like head of the conglomerate and his stupid slimeball son who has big plans for the zoo.

This is such a fun movie, it doesn't have to make sense at all.