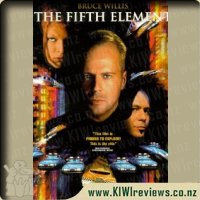 Set in the 23rd century, Luc Besson's The Fifth Element takes us to a world vastly different from that which we know today.

For ex-Marine Korben Dallas (Bruce Willis), life has become tediously repetitive: he drives a flying cab for a living, and eats take away from the same Chinese restaurant, which delivers directly to his window, every day. But little does Korben know, a great extra-terrestrial Evil has teamed up with Zorg (Gary Oldman), and threatens to destroy the Earth, an event which can only be prevented by combining the four Earthly elements with an alien "Fifth" element. Soon, Korben finds himself a pivotal figure in saving the Earth when a beautiful alien, Leeloo (Milla Jovovich), falls through the roof of his cab, and turns out to be the elusive fifth element.

In the ultimate battle of good versus evil, only Korben and Leeloo control the key to humanity's survival. And the clock is ticking...

Set in the future, Korben Dallas is your average New York taxi driver fresh out of the military, unlucky in love and close to losing his job. One day the ultimate fare literally falls into his lap as Leeloo enters his life via the roof of his cab. Leeloo it seems was genetically manipulated to be the ultimate weapon against pure evil but her beauty and butt-kicking hide a more fragile nature that Dallas and a host of others will have to step up and help her save humanity. The overall plot is basic but everything that goes on in it makes this a movie to last.

There's something for everyone, eye candy, action, gun-play, excellent acting, amazing visual effects, romance, creative sets and costume design, dynamic and interesting music, explosions and a mildly annoying but funny Chris Tucker. In this movie, you'll either love or hate Tucker, or that seems to be the case, yea his character is very grating but he is my favourite part of the movie and for me the movie always gets better the second he's introduced.

The Fifth Element has something for everyone, full of action and some moments to laugh, I'll keep on watching this for years to come.

A gripping thriller starring Veronica Mars' Kristen Bell, PULSE imagines technologies being able to connect individuals to the spirits of another world. When you turn on your cell phone or log on to your e-mail, they'll get in, you'll be infected, and they'll be able to take from you what they don't have anymore - life.