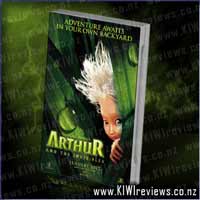 Arthur and the Invisibles product reviews

A Huge Adventure for the Whole Family.

After his grandfather disappears, a young boy sets out to save his family home from emerging real estate developers. Arthur learns that he must follow his grandfather's ancient clues to a vast treasure - and unlock the passageway to a spectacular new world filled with mysterious little people, so tiny they are considered invisible, and enlist their help.

But once in the magical land, Arthur must join swords with a beautiful princess and a reckless army of defenders to save the land from the evil wizard. It seems like an impossible task, but as he discovers along the way, sometimes the smallest heroes can make the biggest difference.

After spending about twenty minutes trying to decide what movie to put on for the assortment of kids in the house during dinner, I finally settled on Arthur and the Invisibles. I watched this a few years ago, my son and daughter too young to remember watching it, and I knew it had a decent strong female character and some pretty decent moments, so thought why not. Freddie Highmore is a fab actor, at any age (loving him in Bates Hotel at the moment) and does a great job as Arthur. With a combination of both real life acting and CGI, it all blends well, separating the two worlds well and does a good job at making it all feel real.

Though it starts off a little slow, it was done well enough that all the children, from ages 4 to 40 ;) were entranced and enjoyting this adventure and I know that I will be hunting out the second and third movies to play for the kids another night. There were a few moments that got laughter from us adults, and a few from the children. The youngest did find the 'Big M' a bit scary at some times, what I like about this movie is he isn't in it for long (it's about the adventure) so it didn't leave her scared for much of it and I love that my kids got to see a princess who can literally kick butt and wasn't standing around waiting for one of the males to save her.

A fun movie, the kids enjoyed it and we'll be keeping an eye out for the sequels for sure.

I actually hadn't seen anything about this movie so when a friend decided to watch it as the kids should like it I wasn't sure what to expect but was willing to give it a go. I didn't pay that much attention in the beginning of the movie but once it started getting interesting then it had my full attention.

My imagination was intrigued by the shrinking process and what the mini people go through in an ordinary garden, Arthur had designed an irrigation system that was put to use in the alternate world in a unique way and Arthur learnt that small ideas can make a huge difference.

I really enjoyed how the movie was presented, everything worked well together. The animation was great, very realistic. The bad guys even looked like bad guys, the actors played their parts well.

I am going to add this to my DVD collection and be on the lookout for the sequels as this could be something that the kids would enjoy watching, my boys have already put in a request for the movie. My youngest never said anything about being scared even when the bad guys were being drowned when things started turning against them, I was expecting him to ask for a cuddle but instead he told me how much he loved the movie.

I'll be honest. I went to see this at the theatres when it came out, simply because David Bowie voiced a character. I wasn't all that worried about whether the story would be good. I knew it was a kid's movie, and at the time I didn't have a kid (in fact I was pregnant with Miss almost 5 when it came out).

As someone with no expectations, I came away pleasantly surprised. The story was fun and adventurous. There was the right mix of friendship, triumphs and baddies to give it some excitement. There were a few bits in there for the mums and dads (and Bowie fans). Plus there were some seriously big names voicing characters.

In some ways the story kinda reminded me of the movie Ants. Just the whole princess thing I guess. But overall it was pretty entertaining. I havent purchased it on DVD yet, but I see myself doing so once Miss almost 5 is a bit older.

As far as family movies go, I think this is one of those movies that really only appeals to younger families 10 and under. Arthur is a confident boy, who takes all sorts of unexpected surprises in his stride, and shows some amazing problem solving skills.
This movie was resonably fast paced, and very well animated, captivating and real enough that you became emersed in the movie.
A nice sense of family is promoted, with Arthur working to help his Grandfather, and subltly sending the message of how important family is.
I would recommend this one as one to watch!

Having read the book not long before seeing the movie, I already knew the story, but that didn't stop me getting captivated by this beautifully done tale of a young boy who sets out on an adventure in the effort to save his beloved Grandmother's home. With a brilliantly blended mixture of CGI and real time scenes, 'Arthur and the Invisibles' is filled with wonderful artwork, loyalty, plenty of adventurous spirit, and the hint of a love story as Arthur meets the lovely brave Princess Selenia. This movie is filled with many well known voice talents, such as Madonna, Robert De Niro, Mia Farrow, Snoop Dogg, and Harvey Keitel, amongst others, and is one that will be loved by kids of ANY age.
Although, as with any book and movie combo, there are parts from the book that are lacking in the movie, this was one occasion where, for once, no major sections of the book were left out in the movie version, but then this is probably due to the fact that Luc Besson both wrote the book and directed the movie. The end definitely leaves things open for a possible sequel, but could also just as happily leave things as they stand.
A very 'cute' and enjoyable movie, this is a good one to add to the collection if you have under 10s in your household, and one that the parents will probably find themselves quite happily getting distracted with.

The 39 Steps is a fast-paced adventure movie based on the world famous novel by John Buchan. Starring Rupert Penry-Jones (Spooks, Cassanova) as sophisticated and dashing hero Richard Hannay, a man with an inquisitive mind and a miraculous habit of getting himself out of tricky situations.

Set on the eve of World War One, Hannay has returned to London from South Africa to begin a new life, when he becomes embroiled in an undercover ... more...