« It's a Wiggly Wiggly Christmas review 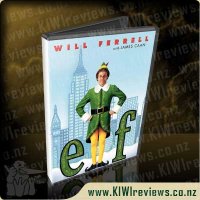 Even the snowmen aren't friendly in New York. In fact, they don't even speak. Worst of all, everyone has forgotten the true meaning of Christmas, and it's up to Buddy and his simple elf ways to win over his family, realize his destiny and, ultimately, save Christmas for New York and the world.

I'm a sucker for Christmas movies. I love the Christmas season, the holidays and gift giving. Part of the magic of the season for me, is a good holiday movie. Full of love, family and the true meaning of Christmas. This movie has it in spades with a bit of magic thrown in. Okay it is still nicely secular, but there is Santa and elves and all that childhood stuff that I crave in December. Its quite musical too, though it is not actually a musical.

This movie is the story of Buddy, a human baby who was adopted into the home of a North Pole Elf. He grows up, and finds that even though he has some amazing Christmas spirit, he isn't quite keeping up with the other elf children. That's when he discovers he isn't really an elf and goes on a journey of self-discovery. Cue the quite predictable monstrous real father and his neglected, dysfunctional real family.

Buddy strives to make his way in the Human world, struggling to find his place in the world. Never quite fitting in anywhere. While all this seriousness is going on, the movie still manages to be really funny. There is lots to laugh at, and lots of marvel at too. This is one I can watch again and again.