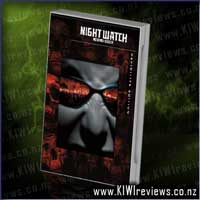 Set in contemporary Moscow, Night Watch revolves around the conflict and balance maintained between the forces of light and darkness, the result of a medieval truce between the opposing sides.

As night falls, the dark forces battle the super-human "Others" of the Night Watch, whose mission is to patrol and protect. But there is constant fear that an ancient prophecy will come true: that a powerful "Other" will rise up, be tempted by one of the sides, and tip the balance plunging the world into a renewed war between the dark and light, the results of which would be catastrophic.

OK, to be fair, the "believability" scale may seem a little confusing, or outright wrong... but I put it to you that in this case I am using it to guage the 'internal believability', that is, an indication of how well it holds together using only it's own internal reality. "In such a world, would this seem to hold right, or does it have more holes than a pair of fishnet stockings?" was the question I posed to score that one. The result was simple... there were a few small irregularities and continuity errors, but on the whole it was quite internally consistent.

Imagine a world where individuals, "Others" as they call themselves, gifted with suopernatural abilties, are discovered and offered the choice... "Do you want to be good, or evil? Do you want to join the Army of Light, or the Army of Darkness?" That was the agreement made back when the world was young and the two armies first clashed in a pitched battle against each other... to prevent the utter destruction of them both, they agreed upon a truce and each created a police force to monitor the other side's activities... the Army of Light had the Night Watch, and the Army of Darkness had the Day Watch.

This movie, based upon the graphic novel of the same name, covers the time leading up to the fulfillment of the Prophecy, and boy oh boy, what a time of terror and strife it is. Twisted plots, and equally twisted cinematography, lead the viewer around the corner and out the far side! With scene flips, sharp and contrasty shots being thrown at you like strobelights, jarring music and sound effects, all bending the viewers' minds around into pretzels, the characters are almost secondary.

This movie is very hard to review without giving away major plot elements, however I can say that if you want an idea of what to expect, consider this... take the second movie in the "Crow" franchise, blend in elements of the "Blade" movies, distil the resulting concept as it might be interpreted by a semi-autistic child when viewed in the middle of a disco floor under strobe lights, while under the influence of mind-altering substances... and you are starting to get the idea.

Overall, I rather liked it, I think... it is one of those movie I think I will have to watch maybe 4 or 5 times before I really have a handle on the full implications of the main plot themes, at least 3 of which I identified and partially untangled on the first watching. A stunning movie, and with rumours of a sequel in the works already, this is a franchise I will be keeping a very close eye on. The biggest Plus Card for me was that they catered to the global market by providing an English voice track as well as the original Russian version. Subtitles would have seriously killed this movie for me.

Mitchell (Josh Duhamel) and Carter (Dan Fogler), life long friends who have drifted apart, are on a road trip when their old pickup breaks down, leaving them stranded on an isolated dessert road. Nobody can pick apart a man like his best friend, and as the relentless elements of the dessert grind them down, they start to attack each others life decisions with unwavering brutality. As they question who they are and who they could have been, their ... more...