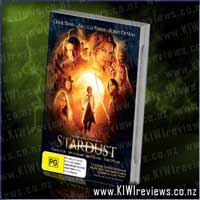 Stardust, based on the best-selling graphic novel by Neil Gaiman and Charles Vess, takes audiences on an adventure that begins in a village in England and ends up in places that exist in an imaginary world.

A young man named Tristan tries to win the heart of Victoria, the beautiful but cold object of his desire, by going on a quest to retrieve a fallen star. His journey takes him to a mysterious and forbidden land beyond the walls of his village. On his odyssey, Tristan finds the star, which has transformed into a striking girl named Yvaine. However, Tristan is not the only one seeking the star.

The King's four living sons - not to mention the ghosts of their three dead brothers - all need the star as they vie for the throne. Tristan must also overcome the evil witch, Lamia, who needs the star to make her young again. As Tristan battles to survive these threats, encountering a pirate named Captain Shakespeare and a shady trader named Ferdy the Fence along the way, his quest changes. He must now win the heart of the star for himself as he discovers the meaning of true love.

This is a movie that I really liked, romance, comedy, action, everything you need for a good film.

Where Tristan lives, there is a wall, which no one is allowed to cross, his father did many years ago and nine months later had a baby left on his door step. Tristan is in love with a local girl and in hopes for her hand in marriage says he will fetch a fallen star, causing him to cross over the wall into a whole new world where stars are not just twinkling lights and magic is very real. This is a coming of age story for Tristan which includes sword fights, ghosts, murder, witchcraft and pirates.

Captain Shakespeare is my favourite character, fierce and tough on the outside but a real softie at heart, and you know he has a great story or two to tell, I could watch a movie based on his character, no problem. I had to laugh at the brothers who were all so desperate for the throne that it was just following family tradition to try and kill each other off, but then they discover they are stuck in limbo until someone is crowned ruler. The characters are lots of fun and this is a great adventure to go on with Tristan.

I really do love this movie and can happily watch it over and over.

Call me a romantic if you want, but I loved this movie. From its excellent casting to its perfect, happy-ever-after fairy tale story, Stardust is one of those films I came away from with a sigh and sheepish girly smile.

There are so many brilliant things about this film, I hardly know where to start. From Robert DeNiro's incredibly camp, yet charming cross-dressing sky pirate Captain Shakespeare to the ghosts sitting around like those old men in the Muppet Show, commenting on their brothers' adventures. I particularly love the way that Captain Shakespeare gives Tristan a 'hair-cut' which transforms him from wearing a horrible bowl cut to long edwardian locks.

The costumes, special effects and landscapes in Stardust are all beautiful and perfect for the fairy tale environment. The romance hits all the right notes, high and low. The humor is well placed, with obvious bits for the kids and more amusing implications for the adults.

The only strange things are the original premise (which apparently was even stranger in the book) involving a one night stand with a magical young woman where the boy ends up with the baby... *shrugs*... and the fact that Tristan waits until after his uncle is murdered by the witch to act all heroic. Also, his mother seems like a slightly pointless character near the end there...

But all that aside, Stardust is cute and I have watched it four times, which says something considering normally I will not watch a movie more than once.

Despite the good cast line up, I had rather mixed feelings about this movie. In some ways it was thoroughly enjoyable, with a good dose of fantasy, romance, and comedy. But in others, it was corny, overdone, and well, really just another fantasy movie. Robert De Niro was a hoot as the very-much-in-the-closet Lightning Pirate, Captain Shakespeare, almost scary in how well he camped it up. However, Claire Danes's performance as a star in human form was somewhat limp, as was Charlie Cox as the 'hero' of the movie.
Although younger kids will probably love Stardust with its pirates, magic, heroes, witches, etc (my son certainly did, watching it a couple of times in the same weekend), older generations may possibly find it drags a little in places, and be prepared for many groan-worthy moments. Worth placing in the kids' collection? Yes. Worth rushing out to add it before it hits the $10 sales shelves? Not really.

However, when he meets Marianne (Evan Rachel Wood), a feisty fairy princess whose heart was broken by a philandering fiance, he begins to change his mind.

Meanwhile, an elf named Sunny (Elijah Kelley) makes his way to the Dark Forest to collect enough primrose petals for a potion of his own.