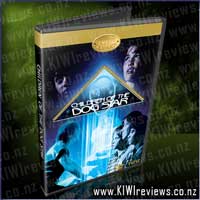 12 year old Gretchen comes to stay on her uncle's farm for the holidays, but shortly after her arrival strange things start to happen. Gretchen has a passion for science and a talent for all things mechanical, which is why the old brass weathervane "The Brass Daisy" fascinates her. But the brass daisy has a complex and terrifying significance, and Gretchen and her new friend Ronni discover its links with the far distant Sirius, the Dog Star.

A six-part science fiction thriller for children, this much-loved 1980's classic TVNZ series is now available for the first time on DVD. Written by Ken Catran.

I recall this series with a sense of warm nostalgia, taking me back to cold winter evenings huddled under my duvet on the couch watching Gretchen trying to explore this strange alien artifact, while Ronni tries to get to grips with his cultural heritage and enforce the Tapu on the swam where the pieces are buried. Add in the machinations of a ruthless property developer and her young son, who finds friendship and excitement by joining the adventurous young duo, and the weasly interference of a couple of local shopkeeping brothers who want the sale to proceed so they can be rich, and you have some dated, but entertaining, drama going on.

Now don't get me wrong, this series *is* classic NZ television... the clothes and language date this series as clearly in the early 80's, rural Kiwi, and aimed at the younger audience... however for those of us who were reasonably young in those days, it takes you back to a simpler time where cars could be parked unlocked and a 'Gangsta' was the nickname of one of the local bikers who drank with you at the pub. Those days are gone, drowned in the rampant Americanisation of our society, and this series doesn't quite appeal to those born around that time, but it seems to appeal to some of our kids almost as much as it did to us.

If your little ones are into (c)rap music, video games and online social networking, then you may find they take a quick glance at this and head off to play Xbox, but for those whose kids lean more to the intellectual or the escapist fantasy, this could well be a hit.

Overall, a wonderful piece of our youth brought back to us, and one I am dearly glad to see on the shelves.

The Doctor returns for an epic Christmas adventure.

With brain-swapping aliens poised to attack New York, the fearless Time Lord teams up with an investigative reporter, a familiar bumbling figure in a duffel coat, and a masked superhero known only as The Ghost. Can the Doctor save Manhattan from the deadly alien threat? And what will be revealed when we see behind the mysterious new hero's mask?