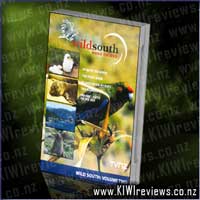 The second volume in the Wild South series features:
•  Up With The Birds
•  The Firstborn
•  Island Eaten By Rats
•  The Mangroves
•  Snares - Gift Of The Sea

Compared to some of the documentary DVDs I've seen, Wild South: Volume 2 was rather on the slow side... informative, yes, but still rather slow. There were several times I nearly drifted off to sleep, especially during "The First Born" section, where the monotone of narrator John Mann's voice was extremely slow and sleep inducing.
Also, why is it that documentaries like this focus mostly on birds? Any type of bird was fine, but the main focus definitely seems to be birds! Ok, there was still bits and pieces included about other types of animals too- seals, rats etc... but even during the sections that was supposed to be about them, there was still more footage about birds! Since NZ does have quite a lot of non-avian wildlife, it was rather disappointing not to see more of these as well... maybe they'll appear in further volumes.
The section I found the most interesting was definitely "The Mangroves", which focused on a large range of the smaller creatures plus the plant life, and of course... the birds... of the Mangrove Swamp up in Northland.
Overall, an informative documentary, but not the most enjoyable.

Apples & Bananas is the tastiest treat for children since tea time! Twenty-two bite-sized nursery rhymes and songs that have been sung by children for hundreds of years have now been given The Wiggles' special musical magic! Sing along with special guest Lee Hawkins to "This Little Piggy Went to Market" and with the delightful Dennisha Pratt on "Miss Polly Had a Dolly". There's the "spider-iffic" actions of "Itsy Bitsy Spider", Dorothy ... more...