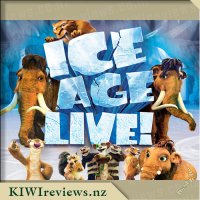 This May, Ice Age Live! A Mammoth Show On Ice is coming to New Zealand for the first time.

From the creators of Cirque du Soleil, Ice Age Live! A Mammoth Show On Ice is hailed as one of the best family shows of this decade. Audiences will be treated to a spectacular event, including huge LED screens, pyrotechnics and acrobatics performed by world-class athletes. A spectacular ice skating show, Ice Age Live! A Mammoth Show On Ice sees the loved characters from the three blockbuster Ice Age movies. Follow Manny, Sid and Diego as they set out to rescue young mammoth Peaches when she is kidnapped by an evil bird. Helped by Scrat, the acorn-loving squirrel, they have all kinds of adventures, surviving an avalanche and discovering an enchanted garden. All of this in a colourful and enchanting arena ice spectacular set to entertain the entire family.

Ice Age Live! A Mammoth Show On Ice has delighted audiences of all ages in its global, five-year tour, visiting more than 30 countries around the world. It is an impressive show on a mammoth scale, be prepared to enjoy it as much as the kids do.

Ice Age Live! A Mammoth Show On Ice is produced by Stage Entertainment Touring Productions. The show is co-directed by the brilliant mind behind Cirque du Soleil productions, Ka and Dralion, Guy Caron. Dialogues are supervised by Michael Berg, who co-wrote the Ice Age films.

We went to see this show yesterday morning at Claudlands Arena. I have been to see a couple of "On Ice" shows with my children in the past so I knew what to expect. Our seats were in the second tier of seating and we had a good view of the front of the stage. We sat down and the house lights went down as the show started.

I loved that the stage area was in three parts. The action started above the main stage and I didn't realise that Scrat was on until my 4 year old squealed and pulled on my arm. We were all very engaged in the show from that moment. Scene changes were made easy but technologically fascinating with moveable screens that opened and closed to form caves, and open fields. I also liked the way the actors moved in and out of the scene and even interacted with the audience a bit, though my kids were disappointed we were too high up for high fives.

The costumes were amazing, and really pretty for the snow and the flower fairies. The massive Mammoth puppets and the smaller ones, were amazing too. I wondered aloud to Miss 9 if there would be two or three people driving Manny. She thought maybe one, but I don't think so. The only thing about the costumes were that they were a bit unyielding for certain scenes. This meant that the actors would step out of the main costume to do the scene and then step back in. The kids didn't mind this, but I was quite confused. It was only in the second fight scene that I realised the smaller creatures were actually the bad guys and not just minions of theirs.

I thought that for a two hour show, of two halves they did a good job of keeping things varied and interesting. There were two storylines we were following. One around Scrat and his acorn, and one around the Ice Age herd. On top of that, there were acrobats and martial arts scenes. At interval I asked my kids what they liked the best so far. Miss 4 said the truck. It just so happened the Zamboni was out on the ice and she loved watching it. However, I also know she enjoyed the disco style music scenes a lot and got up and danced along twice. My eldest loved all the scenes with Peaches. She thought that she was the cutest character.

I found that the kids got a little restless in the second half. However, even though I was wowed by the first half, I thought the second half was even more spectacular. There was just more to it and more effects on the screen that added to the wow factor for me. Their restlessness in that second half is quite normal though, and I don't think it was a reflection on the quality of the show, but on their ability to sit still for anything that long. We have had a similar experience with their attention spans at circuses, and in movies.

After the show, the kids were so excited to go home and watch some Ice Age movies. My eldest when she was younger was quite obsessive about Ice Age and we would have the movies on high rotation every weekend. So I know she got quite a kick out of seeing the characters come to live for her in puppet form. My youngest hasn't been as exposed to the movies, and so the characters were possibly not as big a deal for her. With the newest Ice Age movie releasing here soon, the ice show was well timed for both of them.

You can tell when a show is a hit by the audiences reaction. Kids squealing with joy, audience participation when required and smiling faces everywhere - this definitely fit that criteria. From as soon as it started with Scrat trying to hide his acorn kids were jumping in their seats with glee and then when Manny stepped out the sheer magnitude of its size was mind blowing. I have to admit I was even squealing when Sid, Manny and Diego were standing right in front of me.

Unlike other big-name ice-shows, this was a show in its entirety, telling a complete story which ventured through all sorts of fantasy areas. The fairies and flower pod were beautifully done and when the snow fell from the ceiling I was pinching myself at how lucky I am to see the show. With so much happening there was never a dull moment. The only real slow down was during the fighting scenes where I noticed the audience and the younger children especially starting to get restless. It was a tad dark with the fighting birds but it still managed to retain its entertainment throughout with aerial skills, characters running around on the floor and entertainment happening on top of the stage.

Our seats were amazing and we were so lucky to be second row from the stage which allowed my girls to have up close and personal contact with the characters - which, it has to be said, was an added bonus for both of my girls, especially the hugs they received at the end and all the high fives.

I loved the pure entertaining ice skating especially when Scrat and his girlfriend are fighting for the acorn and jumping, fighting and leaping through the air. Unfortunately, they were not evenly paired as the male was definitely the superior dancer and it showed on more than one occasion. Only the male was jumping and showing his skills and the female at times looked like she was about to trip or fall over the barrier. This was the only real occasion that the unbalanced dancing was noticed. We loved watching the ice dances, fairies and when Sid's minions were dancing it was great. However, the singing could be a little questionable at times.

As much as I would love to say this is the best show in the world I all in honesty can not. As a show which has been seen worldwide I am shocked that Manny's voice has not been addressed as it is terrible - it is like a very bad Christoper Walken impersonation and it's appalling. Diego you can tolerate, Sid was fantastic - although he did slip a couple of times - and Peaches is the cutest little thing. It sounds nothing like Ray Romano's voice and as he is the main character you would think they could get someone more similar than the one who was used. Even Ellie's voice was not a close match to Queen Latifah's but luckily we did not have to put up with it for too long. I just expected more, or even similar.

Despite that, it definitely is an entertaining show and one that my girls will remember for a very long time. I like the different elements that were brought to the stage and honestly my hat goes off to the costumes. Another thing that must be commended is when the costumes became too constricted for some of the movements like the bird or Diego fighting they could remove it and step out of it and dance in tights which added to the show instead of detracting as not only did it show the children that they were all just wearing costumes and not to be afraid it also allowed the performers to do some amazing moves more freely.

Besides the voices and the drawn out fight scene, it was definitely a great show to see. On another note (which I was really happy with) there is not much merchandise available and food was a reasonable price compared to other similar shows which a bonus to parents out there as it leaves your wallets a lot healthier after the show is over.

FLynn Carsen may appear to be an ordinary librarian working at the world-famous Ney York Metropolitan Library, but beneath the public library lies the centuries-old headquarters of scholars and adventurers who investigate the bizzare, collect dangerous artefacts and save the world from supernatural threats.

When an ancient conspiracy threatens to destroy technology and bring back the age of magic, Flynn must recruit four extraordinary people to join in the quest. If these new recruits fail, the world will be plunged into a new dark age. But if the succeed, the will become the new Librarians.