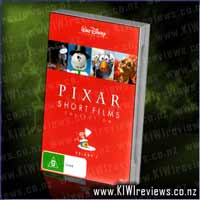 Having been a great fan of many of the Pixar flix, and always having a great laugh at the mini movies that screen either before the main feature, or sometimes during or after the end credits, and owning almost all the movies since "Toy Story", I had my own plans to compile a single disc with all the mini movies on it...

So you can imagine my surprise to find, only a week later, the entry in the "Coming Features" lists of... this! They did stole my thunder... but in doing so saved me a lot of effort.

Here we have all the ones we know and love, especially my personal favourite "For The Birds" which appeared on "Monsters Inc", as well as a pile of the not-so-famous clips that came from Pixar's very early days. These ones are clearly evident, as the smoothness of shapes and movement are clearly more primitive. However, for me this doesn't detract from the enjoyment of watching, because the stories themselves are still as entertaining, regardless of the number of render polygons.

Overall, if you have enjoyed ANY of Pixar's movies, and had a giggle at any of the mini movies that showed up, then you're going to want to get this. Nuke up a big bag of popcorn, grab the kids, settle down and laugh yourself silly for almost an hour. Best of all, I LOVE that this is tagged as "Volume 1"... with 4 more Pixar movies still to be released on DVD in New Zealand over the next 3 years, there is the promise of many more mini giggle-fests to come.