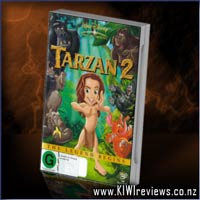 Experience the beginning of the legend with Disney's TARZAN 2, a hilarious all-new, motion picture loaded with laughs and excitement.

Before he was King of the Jungle, Tarzan was an awkward yound kid just trying to fit in. When one of his missteps puts his family in jeopardy, Tarzan decides they would be better off without him. His thrilling new journey brings him face to face with the mysterious Zugor, the most powerful force in the land. Together, Tarzan and Zugor discover that being different is not a weakness and that friends and family are the greatest strength of all.

Terk, Tantor and all your favourite characters are back, and they've brought along some new friends, in an action-packed adventure that's sure to delight the entire family. With new songs by Phil Collins, you'll GO APE over Disney's wild, new Tarzan 2

Disney has a reputation, and a well-deserved reputation, for producing excellent animations and I have to say that Tarzan II is no exception to the rule. The storyboarding, animation, voice characterisations are all exemplary and lead flowingly from scene to scene. There is enough humour for the adult viewer to not be bored by this film, and plenty of visual and verbal gags to appeal to the younger viewer.
Despite not having seen the first Tarzan film by Disney, Tarzan II was surprisingly easy to get into. The story is about Tarzan's life prior to the first film, it includes characters from the previous film, and introduced new characters (So I am kindly informed by the blurb on the back of the box). Phil Collins, one of the few modern music artists I have heard of, provided the music both for this sound track and its predecessor some ten years ago. The music is entertaining and well sung both by Phil Collins and by the vocal characterisation of Tarzan. It is not intrusive as some soundtracks can be and adds to the whole film.
Whilst this isn't my first choice for a film, I do have to compliment Disney and all the animators on a job well done.