Back Off Bully review 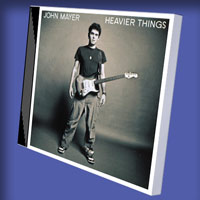 Plus extras available only when played in a PC. (Utilises CD-Extra format)

I heard his first big hit "Your Body is a Wonderland" from the "Room for Squares" album (and also from his first, independantly released album "Inside Wants Out") and was hooked on this amazing artist. This became firmly confirmed when I bought his "Any Given Thursday" concert on DVD.

This guy would have to be the Jamie Oliver of music, with his youthful looks, boyish charm, mastery of his chosen field of expertise, and off-beat humour.

The music is from the heart, and that's easy to see and hear. This album also has something different in the case... a series of diagrams that graphically explain and inform about the various tracks. For those of us who are image-thinkers, it's a really cool addition that gives a LOT of extra info about his songs. For example Track 8 - Daughters was written right here in New Zealand! There is even a table and key system that lets you know abour the tone and feel of each track, moody, ballad, up-beat, etc. Great stuff.

My favourite track would have to be Bigger Than My Body, if for no other reason thatn I can empathise with it. We are each more than a body... we are a heart, a mind, a soul, and more... greater than the sum of our parts, we are synergy in action.

Overall, a great album, and yet another welcome addition to my collection.

The Hunting Party is the sixth studio album by American rock band Linkin Park. The album, self-produced by band members Mike Shinoda and Brad Delson, was released by Warner Bros. Records on June 13, 2014. It is the first album since Meteora not to be produced with Rick Rubin, after producing the band's previous three studio albums. The title The Hunting Party is a contextual metaphor: Linkin Park is the party that is hunting to bring back ... more...