« The Smell of the Moon review 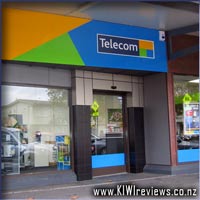 Drop in and see our friendly staff for all your Telecom Mobile needs.

Way back in the dark ages when cellular phones were fresh on the scene, I bought a small, very basic phone which served me well for over 2 years. Then a competing company arrivedc on the scene offering some amazing features, so I switched over and stayed with them for over a decade.

Recently however, their services stopped comparing favourably with Telecom's current range, and with my handset dying just outside of warranty, and my PDA totally dead now, I figured it was time to upgrade and combine the features, so I went hunting for the Palm Treo 650, which was subject to a promotion recently, where it came with a car-charging kit and a 1gig SD card.

So, after visiting the nearest Telecom outlet, in a local mall, but after over an hour of wrangling with the staff, I was told that I "...did not qualify to own a Telecom phone..." which shocked me to the core. What a stupid thing for a salesperson to say! I mean, how does a teeny-bopper kid with no credit history qualify and I don't? On top of that, I was told that not only would I have to sign up on a phone plan, but because the unit was a PDA as well, I had to sign up for a very expensive data plan too. Even when I told them I wouldn't be requiring that service, they said I wouldn't get the unit if I didn't take a data plan as well.

So, in utter disgust, I left the shop and headed over to the next nearest, which was this store. I walked in the door 15 minute before closing time, walked up to the guy behind the counter and stated my case, and explained the response from the other store. He introduced himself, and promised that he would sort me out and that I would be leaving with a brand new Treo. Basic phone plan, no data plan required, and a great pricing deal that would save me more than $400 on the purchase price, and about $10/month on the plan.

After 20 minutes, I was headed out the door with the box tucked under my arm, a nifty beltclip and holster... and the sad news that the promotion had apparently expired a month ago... so no car charger and no SD card... but a couple of the senior staff had said they would see what they could do...

A few days later, I received a phonecall from the guy who sold me the gear, with the news that they had found me a 1gig SD card (It was also a superior brand I am quite impressed with, Kingston) and so I ended up extremely happy with my purchase.

Overall, if you are in, or passing through, Palmerston North, and you are looking for a Telecom-network phone and/or accessories... pop in and see these folks. They are very knowledgable, easy to talk to and get along with, won't pressure you into buying stuff you don't really need/want, and unlike the first store I went to, will NOT lie to you about what pricing plans you have to sign up to. All well and good here!

With a sturdy but soft adjustable G-style ear hook, this unit also has the Push-to-Talk button on a separate cable to allow for more discrete positioning. Compatible with a range of RT units across today's market.