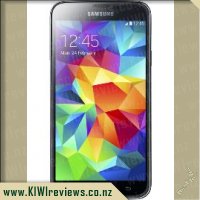 The Samsung Galaxy S5 has a sleek elegant design. The new GALAXY S5 is designed to suit your lifestyle, with an IP67 Certification the phone is resistant to sweat, rain, liquids, sand and dust, your phone is now protected for any activity and situation.

The Samsung GALAXY S5 boasts a huge 16 megapixel Camera with a 2mp front facing camera allowing you to never miss lifes important moments. Get fit get healthy with Samsung S health, The GALAXY S5 is the first of its kind with a built in Heart Rate Sensor which enables you to measure your heart rate directly on your phone.

Samsung GALAXY S5 is here and it is bigger, better and more advanced than ever.

I have a Samsung galaxy s5. I haven't owned it long, but was given it by my sister, after my trusty s3 decided after 3.5 years it had had enough of facebook and social media and gave up the ghost. I had no problems accepting a free phone from my sister, especially one I would not be required to have to learn how to use all over again (I made the assumption it would be much the same as the s3). And I was happy it was free, because I honestly would not pay the asking price for it.

So, I do not know to much about mega pixels etc but apparently this one has huge megapixels, which I assume means it should take super amazing photos. The photos are okay, but not as out standing as I assumed they would be, and I believe they could be better. My son has a phone that has less megapixels and it takes far superior photos to this. I could blame the fact the phone was a year old when I received it, but seriously its only a year old lol

A feature I do like about the phone is that it is protected from the elements: sand, dust, rain, my coffee! well it is supposed to be anyway, I can't say I have ever buried it in sand or wet it much lol but it seems to be ok in a light drizzle when out walking. Ive never used it in actual rain though or the shower haha because I just do not want to risk it.

There are lots of apps and things available to allow you to personalize your phone and make it a handy little device with lots to do. Ive done nothing. I use it for social media, texting, calls, and emails. I find the social media apps freeze and crash a lot, but this is the apps not the phone (i hope). It is great speaker quality though, which I am impressed by coz I often struggle to hear things sometimes. All in all a good phone, but I do personally believe there are possibly better phones on todays market for less than half the price.

I haven't had the phone long but I love it, I upgraded due to my previous phone not having enough storage. I have downloaded the apps I need and a few more and still haven't seen any error message about storage being low.

I love the camera as I can take clear photos of my kids and it is a lot faster than the old phone so they don't have to sit and smile and hope that mum hurries up and gets the photo. I have also used the video camera and it is nice and clear and sharp. What I don't like as much is that I used to be able to use the settings under the photo to share the photo but now I have to log into facebook and do it as if I was on a laptop.

I also enjoy how fast the phone connects to the internet and how fast it processes most things, websites are loaded in a few seconds. There are still heaps of apps and things I haven't used yet.

I am trying to lose weight so use the S Health app, I like the heart monitor but since it doesn't say if the heart rate is good or not it doesn't help as much as it could, I do however use the pedometer and find that some days I'm doing a lot more walking than others. There are other parts to this app that would be useful if I have more time to explore it properly.

Another great feature is the finger print scanner, I activated it within a few hours. Only thing is that sometimes it doesn't recognise my finger print but as a safety feature it does let me type in the alternative password that I set up as a back up to the finger print.

I love this phone and can't see myself needing to upgrade for a few years.