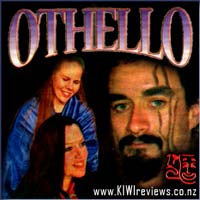 Disclosure StatementFULL DISCLOSURE: A number of units of this product have, at some time, been supplied to KIWIreviews by Feilding Little Theatre or their agents for the purposes of unbiased, independent reviews. No fee was accepted by KIWIreviews or the reviewers themselves - these are genuine, unpaid consumer reviews.
Available:
27th April - 6th May 2006

The tragic tale of Othello and Desdemona.

Othello, like most of Shakespeare's work, is a gripping tale of the psyche of the human mind and the subtlety and sinuous nature of villany. In Feilding's Little Theatre I was swept away on a tide of emotion, immersed in Othello's story told in true Shakespearean style.

All told, the play was beautifully done. Scene changes were kept to a minimum, allowing the audience to maintain a sense of truly being there; and props were also kept simple, enough to give a sense of the scene only - a pleasure in these often over-propped times. The backdrop was beautiful, and the lighting was kept reasonably simple whilst subtly highlighting the events unfolding onstage. Sound effects were used sparingly, but appropriately.

There was some confusion with the change from Venice to Cyprus, as the same actors that played the Senators of Venice played the Officers of Cyprus without much difference in costume.

Othello himself was stunningly portrayed by Gavin Wood, his raw emotion and superb line delivery was impressive and allowed the audience true insight into the madness that gripped the man as his world fell apart.

Jena Ivamy was a pleasure to watch as Desdemona, her beauty and style matching the sense of the character well, perhaps just falling slightly short in portraying the deep love Desdemona feels for Othello.

Cassio, played by Michael Walker was overall played quite well. There was some stiffness in line delivery, although this was all but forgotten in the one-on-one scenes with Bianca (brilliantly exposed by Sarah Coley). He also projected emotion vividly, crying "Reputation" with realistic despair.

Katrina Benjamin (playing Emelia) nearly stole the show for me, sensitive, appealing, and with brilliant comic timing she wove in and out of the story with ease.

Iago, the heinous villain of the piece was played by Doug Cardiff. Doug's audience-directed monologues were skillfully delivered, his facial expressions and gestures as always adding to the words. Unfortunately he was also suffering with sore throat and runny nose, so he struggled with getting his lines out during parts of the play. This combined with constant prompting from backstage did detract somewhat from his performance, although it was easy to see that once all is well it will be stunning. The interaction with Cassio was very well done, hinting at Iago's underlying obsession with not only Othello, but Cassio.

The rest of the cast were mostly quite impressive, with stand out performances from Charlotte Kirby as Lodovico, Megan Andrews flawlessly delivering an impressive monologue as the Herald, and Peter Doherty as Brabantio/Gratiano.

Highlights for me were the struggle between Desdemona and Othello, almost scary in it's believability; the description by Iago of what Cassio does in his sleep, and Emelia's description of the 'scoundrel' that must be poisoning Othello's mind.

Well worth the time to watch, and will only get better - you'd be a fool not to see this play!

As I entered the theatre, I was a little worried that this was a reinterpretation of the original Shakespearian script. However, I was pleased to see it was true to the classic script and setting, which I always find far more satisfying than the modern reinterpretations such as "Romeo + Juliet" where the dialog is kept true, but the whole scene is shifted through space and time. Kinda steals off the magic when they do that.

Othello, played by Gavin Woods, was played exceptionally well, and bracketed by the talents of Jena Ivamy as the maligned Desdemona, and Doug Cardiff playing the duplicitous Iago. Michael Walker played Cassio with distinction, but by far the most accomplished player was Peter Doherty as Brabantio, since he was the only main character who required no dialog-prompts at all.

There was very effective use of minimal set and props. The backdrop apparently took only a day to paint, but was so well done that the mood could be adjusted just by changing the lighting. When there were blue spotlights used, you got a clear moonlit night, however using orange filters gave you a sunrise/sunset with no set changes required. This allowed the players and crew to get on with the play, instead of running around lugging furniture. The costumes were very well made, but the limited players and costume designs led to some confusion, as the same actors played the senior officials of both Venice and Cyprus. Yes, there were some small differences, but they were not immediately obvious because of the common red-&-black colourscheme. I would had suggested red/black for the Venicians, and perhaps a blue/black combo for the Cyprians, both of which allow for gold or silver trim to mark rank and office.

I was intrigued by a slight shift in this version, with the introduction of humour into the character of Iago. By introducing the near-constant grin, and the slightly flop'ish demeanour, it made his eventual revelation as prime betrayer and master manipulator all that more shocking. Another thing that piqued my interest was the addition of a secret sub-plot between Iago and Cassio that kinda stepped out of the scope of the original play. See if you can figure it out. I admit that I didn't... I had to have it explained to me. -blush-

The location of the theatre introduces an element into the play that could not have been expected or planned for. At 10:15pm the evening freight train passed by, quite close to the theatre. The rumble as it approached, passed and then departed came right in the middle of the death scene of Iago's wife Emilia, played with great skill by Katrina Benjamin. This actually added to the whole performance, and if the sound crew were able to ensure that it happened on cue, I think it would be an acceptable part of the play's soundscape. It just enhanced the ominousness of Iago's actions as she died.

Overall, this was a wonderful play, performed by a small but talented cast and amply administered by a knowledgable crew. The only let-down was Doug's constant battle throughout the show with a sore throat and rampant sniffles, which caused unexpected pauses throughout parts of the show. This caused the offstage prompter to get a bit overzealous at times, which just threw everyone's timing out a bit. However, taking all the factors into account, I feel the show was a wonderful success, especially for Doug, since this is only his second 'play', as opposed to 'stage musical' which is his more common genre. The show starts at 7:30pm, with an intermission at 8:45pm, drawing to a climax and close just after 10:30pm. My final verdict... this show is well worth the effort to see.

This classic French fairy tale tells the story of a prince who has been turned into a beast, and Belle who agrees to live with him in exchange for her father's freedom. She does not know it but the Beast is under a ... more...