ProdID: 4064 - Zirka Circus - Out of This World 2013
Performed by International artists 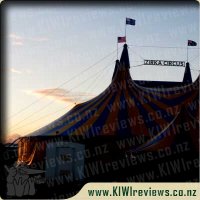 Zirka Circus - Out of This World 2013 product reviews

Zirka Circus is commited to bringing a fresh and exciting new look to circus in NZ! You will be amazed and dazzled by the skill, beauty, and strength of our amazing international artists. You will fall off your seat laughing at our clowns. You will gasp in awe and fear as our acrobats perform tricks never seen here before!

You can be comfortable in the knowledge that Zirka Circus is an animal free circus, with a happy, family atmosphere.

We are now into our second tour with our BRAND NEW SHOW, with all new acts that are even more incredible than our first tour!

Having seen this circus in action for the first time at the Coca-Cola Easter Show in 2012 I was hoping to see a lot of new acts, as promised. What I saw was, unfortunately, much of the same... and no aerial work this time. Still, there were some new acts thrown in to cover the gaps. Admin Note: We have been informed by the circus that they do a 2-year tour of the same acts. It *is* the same show as the one performed at the Easter Show, but it is the first time this show has appeared in Hamilton. The next time the show comes to town will be with a completely new show.

Now, I want to try and be fair here... my kids - Mr4 and Mr12 - had a blast in places, with some laughter and a lot of enthusiastic clapping... so this is a show that's good for kids. It's animal-free so there are no "oh the poor wee beastie" moments to concern adults. The seating was well placed, and fairly comfortable to sit in for an hour at a time (It's a 2hr show with a 15min break in the middle for the crew to set up the hardware for the Globe of Death in the second half), and there were plenty of patches where the kids were loving it... so why didn't I?

Maybe it was the copious patches of pointless 'padding' while the performers did strange almost-kung-fu moves, or maybe it was the very loud whistles in one scene that had all the kids in the audience clutching at their ears... or maybe it was the clown act where there was a 4-way fight scene, part of which involved one clown pretending to snap the neck of another clown and then grinning at the audience and giving a big thumbs-up sign... sorry, but that was the point where I decided that I couldn't handle much more of this.

Thankfully, the show was over shortly afterwards, with a plate-spinner, some juggling and contortionists, then the motorbikes in the Globe of Death.

Overall, I have to give them credit for having some very skilled performers - it takes a lot of practice to make some of these performances look as smooth and effortless as they did... but the show wasn't planned well, and the padding showed all too clearly. On top of that someone really needs to vette these acts for suitability. It doesn't matter that the TV has worse on it - we can turn the TV off if we disagree with what's on display... but I wasn't the only one to be offended and horrified by the "neck snap" incident. Minutes after it happened at least three families that I noticed got up and walked out.

I would not recommend this show for children under the age of 10, and would strongly suggest that the clown-fu skit be removed, or have the fake deaths cut out.

THE TIME TRAVELLER is far more than a circus! It is the story of a young Gypsy boy who seeks to know where his people came from. In a magical glade in the forest he meets a giant talking tortoise who tells him about a ... more...