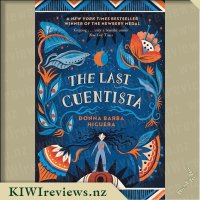 Habia una vez . . . There lived a girl named Petra Pena, who wanted nothing more than to be a storyteller, like her abuelita. But Petra's world is ending.

Earth will soon be destroyed by a comet, and only a few hundred scientists and their children - among them Petra and her family - have been chosen to journey to a new planet. They are the ones who must carry on the human race.

Hundreds of years later, Petra wakes to this new planet - and the discovery that she is the only person who remembers Earth. A sinister Collective has taken over the ship during its journey, bent on erasing the sins of humanity's past. They have systematically purged the memories of all aboard - or purged them altogether.

Petra alone now carries the stories of our past, and with them, any hope for our future. Can she make them live again? An unforgettable journey through the stars, to the very heart of what makes us human.

I was given this book to read just before the holidays and when I saw that it was a sci-fi with a mexican protagonist, I was keen to give it a try. We join Petra as she and her family are planning on leaving Earth, due to the unavoidable meteor that is about to wipe out all life on the planet (and of course, given a little hint about the sinister folk who change everything). Petra is put into stasis with the promise of a head full of knowledge and her family waking up with her, all with the aim of settling on a new planet. Of course, this was never going to go to plan.

Petra is affected differently, when in stasis and when she wakes up, she discovers, that not only is her family not there, the humans awake have mutated and those being brought out of stasis have had their memories of Earth erased (the whole idea being that if humanity was to forget and given a more rigid, structured life without the arts, food, love etc. we would thrive better). While I liked that Petra was trying to figure things out, solve the mystery of what the Collective's plan was and of course, save the day, it just wasn't as cohesive as it could have been.

With a few things that just don't make sense or are never explained (when it could have been ease enough to do) the story wasn't as believable as it could have been. A young lad growing up in that world and knowing NOTHING else, easily switches sides, there's never any explanation as to why Petra is unaffected by the memory wipe and a few other things I can't mention without giving away spoilers. This has a good premise and is certainly well done, perhaps don't read it if you're more of a critical thinker and bound to notice the plot holes.

Juan Cabrillo and the crew of the Oregon are about to sail into a perfect storm of danger. Their mission? To stop a new world war...

Hired to search for a collection of paintings worth half a billion dollars, Juan Cabrillo soon finds himself in much deeper waters when he discovers the vicious leader of a Filipino insurgency is using the paintings they seek to finance his attacks. Far worse, Salvadore Locsin has stumbled upon a deadly ... more...