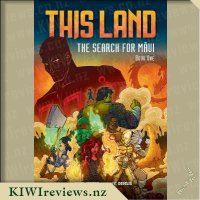 Disclosure StatementFULL DISCLOSURE: A number of units of this product have, at some time, been supplied to KIWIreviews by Scholastic (NZ) or their agents for the purposes of unbiased, independent reviews. No fee was accepted by KIWIreviews or the reviewers themselves - these are genuine, unpaid consumer reviews.
Available:
October 2022

This Land - The Search For Maui, Book 1 product reviews

This is the first in a brand-new graphic novel series with artwork by P.R.Dedelis. It is founded in the history and heritage of Aotearoa. An ancient god has fallen from the sky; a promise has been made and a bargain struck.

The Earth shakes and twists. New lands arise as the old are destroyed, and a deadly fever rages. From the ashes, a new continent is born in the Pacific Ocean - Te-Riu-A-Maui.

In the new world, an ancient taniwha awakes. Tribes fight for survival and people are transformed with abilities beyond their understanding. However, chaos and darkness threaten the greatest treasure of all - family.

Hell'na, daughter of Axeland, must lead a group of mercenaries to find the trickster Maui. Only with his help can she clear her name and bring her whanau back from the edge of death.

My eleven year old loves graphic novels, so took off with this as soon as it arrived. They've read it through once, so far, and enjoyed it enough that they have asked me if we can get the second book when it comes out. They really liked the characters and the overall plot of the book, though they did note that there were some words they didn't understand, they were for some of the small translations that are throughout the book. My eleven year old is planning on rereading this, which is a good sign they have found a good book, so we'll be holding onto our copy for a while.

I, myself, enjoyed this book. I'm really pleased that we have more and more Te Reo and Maori based stories hitting mainstream and I've recommended this to a few people now. What I think really works with this book, is that you could publish it anywhere and still have a good seller, as there are plenty of graphic novels out with words and places not everyone understands. I think my favourite part was the visualisation of a Taniwha, though I also found the whole concept around those stuck in the Waitomo Caves to be well thought out too. The last couple of pages features little snippets about the creators of this book, a nice touch as good to see that almost half the creators are Maori, for a Maori based story.

I enjoyed this more than I anticipated and given my eleven year olds requests, we will be keeping an eye out for part two.

I found myself divided when I read this book for the first time. On the one hand, it was amazing to see so many references in Te Reo - a technique which both normalises and celebrates the native tongue of Aotearoa, making it accessible both to the locals and to readers in other countries. On the other, I was quickly confused by the geographical locations because the new lands re-used the old placenames (both Maori and English) and that caused a feeling of displacement. By the end of the book, I was still not sure whether or not Te-Riu-A-Maui was a re-formation of the original Aotearoa due to seismic upheavals, or a new Pacific country entirely. I suppose it does not matter; the essential thing is that the language is preserved and the old mythology has informed the new.

The visual layout is magnificent. Dramatic colours tell their own story, forcing the reader to spend time on each page to decipher the complex images. We did find the coloured speech bubbles with the white lettering hard to read; luckily, they were confined to Vox Populi and Jack the Blade. Conventional (black on white) text bubbles were used for all the other characters. I thought my compromised eyesight was to blame, but Miss 15, who had joined me to give her opinion on the book, assured me that she had found the white lettering hard to read too.

There are many traditions that have contributed to the publication. Apart from Maori and other Pacific influences, the story draws on Greek, Roman, Egyptian, Chinese, and Norse history. There are links to modern European and American art design, and, of course, recent technology is referenced within the storyline as well as in the character attributes and scoring systems; these are evocative of Dungeons and Dragons and other similar games. I found it useful to discuss the book with my young friend because we have very different backgrounds, but together could evaluate the final effect. Both of us thought the inclusion of so many traditions might be seen as overkill. However, this is a story about an Earth that has been destroyed then reinvented, so it makes sense that there would be significant cross-pollination of cultures.

This is Book One of two, and, like all serialised comic books, it ends with the "to be continued... more next time" style cliffhanger. Certainly, both of us were left curious to find out what will happen in the second volume. There are several things hinted at (who is Jack the Blade, for example?) which will no doubt be developed further. There are also the makings here of a spinoff roleplay computer game. In the meantime, publications like this have a particular attraction for those adolescents who are reluctant readers. The style, the reliance on graphics rather than just words, and the never-ending struggle between protagonists are bound to appeal to many youngsters.

Morveren lives with her parents and twin sister Jenna on an island off the coast of Cornwall, circled by sea except at low tide. One day, Morveren finds a beguiling teenage boy in a rock pool after a storm. Going to his rescue, she is shocked to find that he is not human, but a Mer boy. Morveren turns to Jenna, but Jenna, always the sensible one, refuses to face the truth. Yet when the worlds of Air and Mer meet, the consequences cannot be ignored...

An atmospheric and beautifully written novel from the author of INGO.