No Home for a Weta review 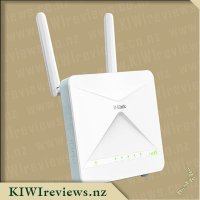 Disclosure StatementFULL DISCLOSURE: A number of units of this product have, at some time, been supplied to KIWIreviews by D-Link or their agents for the purposes of unbiased, independent reviews. No fee was accepted by KIWIreviews or the reviewers themselves - these are genuine, unpaid consumer reviews.
Available:
via online store and at quality D-Link stockists

D-Link has launched the G415, an AX1500 4G Smart Router that allows you to use your mobile carrier's SIM card to share your 3G and 4G mobile network access through a dedicated Wi-Fi 6 network or any of its three Gigabit ports. With its LTE CAT 4 support, you can also download at up to 150Mbps, enabling you to stream in 4K, make conference calls and surf the web seamlessly, without having a fixed broadband connection.

With the modern prevalence of WiFi access points pretty much everywhere you turn these, one could be forgiven for thinking that it's some form of digital utopia - wherever you are, you're connected. But the reality is far from that illusion - there are huge risks to plugging into public-access WiFi and it doesn't take much searching to see a long list of risks, ranging from man-in-the-middle attacks to unwittingly connecting to a fake hotspot, where someone has set up an access point, left it open for anyone to connect to, and uses it to monitor traffic in order to steal any sensitive or valuable information, or just infect your device with any number of nasty little agents that will dig into your device and feed your private data back to someone else and give them the ability to encrypt or erase your device if you don't pay them, etc.

The solutions are few - avoid connecting to free servers, or set up your own secure one... and that latter option is where this little white box rides to the rescue. It is, for all intents and purposes, just a regular WiFi access point the same as you probably have in your home and/or office, but the biggest difference is that this little smarty can take a mobile providers SIM card and use the mobile data network to carry your internet traffic as though you are using your phone. But wait a minute... if it's the same as using your phone, why not just use your phone? There is no easy answer to that, but there is an answer - flexibility, security and sharability. While you can indeed use your phone as a hotspot and share access rights with those you trust, your battery is going to get a horrendous workout and likely cut the online time short. Since this unit is mains-powered it won't suddenly run out of juice and shut down on you. It's also a lot easier to maintain, doesn't tie up your phone, has a lot of extra security that phones don't have, and can serve as a backup connection for a wired network in case of hardware failure with your modem. If using this unit 'at home' (be that your place of residence or your workplace) you can even choose which of the two connections - wired or mobile - will be your primary connection to the greater net. The perfect default for those who don't have a wired connection at all!

Speaking of security, the G415 will support WPA 1-3, ensuring that you will always be using the most secure options available. This will be a huge relief to anyone who has ever worried about connecting to WiFi in a cafe or airport. It also has the EAGLE PRO AI software built-in, giving you extra layers of security and options to fine-tune your connection to suit your needs while also ensuring a solid, reliable connection wherever possible. It utilises the advanced beamforming technology that adjusts the signals being sent so that the strongest signals are always arriving where devices are rather than requiring users to move to areas of strong signal. If needed, it will even signal devices to switch to bands that have lower traffic and are thus 'less noisy' and able to carry more data to and from your wireless devices. The heavy-lifting here is done by D-Link's AI Traffic Optimiser, which automatically prioritises and allocates bandwidth to different devices, and even specific applications, in order to provide users with information about where bottlenecks are happening.

Another key security feature that will provide immense peace of mind is the onboard firewall, with a stealth feature that protects your connected devices from opportunistic baddies roaming online. You can't hack what you can't find, and to have your devices safely cloaked under the SPI firewall's auspices will be a blessing to those who have been targeted in the past.

The G415 has a dedicated 10/100/1000 ethernet port specifically for your WAN (Wide Area Network, aka the internet) connection with an automatic fail-over so that if your wired connection fails for any reason (barring a power cut of course) the router will automagically swap over to the mobile network via the SIM, giving you at worst a slight pause, at best no sign of interruption at all. For that reason, it is a good plan to go out and buy a SIM that will remain in the unit at all times, and pre-load it with a data binge pack or three. It also has 3x gigabit ethernet ports so you can connect "critical" devices - office workstation, home security hub, gaming console, smart TV, etc - so they too remain online should your regular connection suddenly decide that it needs a holiday.

Another factor to consider is speed - your phone likely won't be rated as a WiFi 6 router, meaning you could be looking at a seriously degraded connection compared to what you could have with this unit in play. I could rave about the massive speed boost you would get, but the reality is that the mobile network is a bottleneck that can't be addressed from a user's side, so while you can have blazing fast connections to the router, ranging up to 1500Mbps, the mobile connection is limited to just one-tenth of that at 150Mbps. That's not a fault of the hardware, it's a limitation of the infrastructure. Still, '150' is better than '0' and the peace of mind knowing that your connection is not being hijacked or spoofed is worth it - unless you have shelled out for a super-high-bandwidth connection, it's still better than a domestic fibre plan in most cases.

When it comes to flexibility of function, it's hard to look past the fact that this unit will give you wired and wireless connectivity as long as you are within range of a power plus, but there are many other features that would work under this heading. For example, the built-in Speed Check will let you check to see what your current connection speed is. With that information, you can then decide if you need to relocate to another spot for better mobile signal strength. While it may seem like a small thing, it's a very important tool for diagnosing slow speed or connection stability issues, much in the same way you would need to if you were browsing the web on your phone and getting far too much pause and not enough push/pull.

Because this unit is part of the EAGLE PRO AI family, it is compatible with other such units which can combine forces to become a mesh network. No mini lionbots required. The AI Mesh Optimiser handles all the effort there, weaving the units into a seamless network that allows users to roam the house and not have to worry about drop-out, disconnection, or having to manually swap between SSIDs as they move between coverage zones. With the usual array of features now pretty much commonplace in D-Link WiFi-6 rated devices - MU-MIMO (Multi-User Multiple-In Multiple-Out), OFDMA (Orthogonal Frequency-Division Multiple Access) and the expansion of the band from 80MHz to 160MHz to allow for more discrete threads to thus serve the data needs of multiple devices - the G415 is the latest evolution of a technology that has been around as long as phones have had data capabilities.

I recently took this unit with me on a day-trip to Auckland and set it up next to me in the McDonald's booth while I was processing some photos since I wanted to upload them to my cloud storage after editing. I got a lot of odd looks, a few questions, and even a few enquiries as to whether it was a worthwhile investment. My answer was, of course, that it's the best bit of kit I could ask for, and I should have bought one years ago. A few even asked if they could share my connection since they were struggling to connect to the in-store free wifi. #Awkward

Setup is simple, especially if using D-Link's EAGLE PRO AI app on your phone. Put a SIM into the unit, power it up, open the app, scan the QR code on the base of the unit, set a few preferences and you are away. Oddly though, I found the order of setup to be different in the app than in the printed instructions - one demanded I power the unit up first and then go into the app, but the app got "upset" that I had powered the unit up first. Still, pushing on and ignoring the message gave me a fully configured network pushing and pulling data through the mobile network without trouble, so it seems to be a bit of a moot point which way around you do it. For those who are a bit nervous about setting up tech, just download the app and follow the on-screen directions for a stress-free setup in under 5 minutes.

Overall, my only wish regarding this unit - and it is a wish, not a critique - is that it would be a bit smaller and the aerials were more integrated. It's not a lot of fun to carry in a full backpack if you happen to put it near the back of the bag. I ended up repurposing an old padded camera bag to act as the portable home for this device, and that works very well for me indeed. Definitely worth exploring if you travel a lot and want the safety of a dedicated connection that no one else can hack into, or have a family who all want online access at good speeds. I had no trouble watching streaming movies through this while I was away from home-base, and the photos slipped smoothly up the line to the cloud storage just as though I was sitting in the office hooked into the fibre.