« The Girl on the Train review 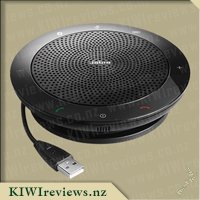 Turn any conversation into a productive conference call in seconds with the Jabra Speak 510. An intuitive speakerphone that connects via USB and Bluetooth with crystal clear sound. All the conference call capabilities without the complexity.

For such a small device, it sure packs a big sound. Feature-packed yet tidy and discrete, this speaker could be called a renaissance device. Connecting to your pc via USB, it will also connect to your mobile via Bluetooth at the same time. Thus, you can happily be flooding the room with your Spotify playlist, and when a call comes in the unit will seamlessly transition you to the call.

The ability to control the call - pick-up, in-call volume, mute and hang-up - entirely from the unit itself means your phone need only leave your pocket if you need to '...press 1 for customer service, press 2 for sales, press 3...' or to initiate a call. While many modern smartphones have voice-dial, it can be a bit hit-n-miss getting it to wake up and pay attention to you, but if you have an app that masters that trick, this could be the best piece of kit you add to your toolkit this year.

The unit constantly trickle-charges itself from the USB connection when connected, so if the need arises you can unplug it and use it as a portable unit too. Though the specs state "...up to 15 hours..." the best I managed after more than a month of solid testing was a smidge over 14 hours - close enough to be impressive, and predictable. The cable wraps around the base and the plug smoothly locks itself away to give you a very sleek and compact appearance in portable mode, so you don't need to carry a cable storage system, stress about leaving the charge cable behind or deciding which device will donate its cable to charge this instead.

Pairing to mobile devices was simplicity itself - a long-hold on the Bluetooth button triggers pairing mode, and the rest is all done by your device. It took me all of 2 minutes to pair this unit with a phone, a tablet and a pc via Bluetooth too! The longest part of that was reinstalling the Bluetooth drivers on the pc. Once this was done, I took great delight and getting high-end sound out of my PC for the first time in months, since the last decent speaker I had up and fried itself after 2 years of hard labour - I have a hearing issue and I really enjoy sci-fi movies, so I really push speakers to their upper limits sometimes. I admit, I will be curious to see how long this unit can stand the hammering it has only just begun to endure.

Testing this unit as the centrepiece of a hands-fee conference call between four parties showed the strength oif the built-in DSP system - while one of the call participants was using a car hands-free kit, and causing a lot of echos as the rest of us heard our own voices bouncing back to us after a brief delay, no-one in the call knew I was on a speakerphone until I told them near the end. One swore I was telling fibs and was on a landline, another said I must be using a high-end set of gaming headphones because he knew them best and heard 'tell-tale frequencies being damped down'... but when I switched to videocall mode and they all saw the unit in action, two of them immediately demanded I tell them all about it, where they could get one, and could I sort out a discount deal for them.

Overall, this is one device to replace them all. Seriously, I have put aside my cordless headphones, portable speaker and pc speakers, all in favour of this one tidy little black disc. My only gripe is that this wasn't around a couple of years ago when I bought all the units I have just replaced.

Protect your iPad 2 & "dress up" your Smart Cover with one of our Gizmobies 3D skins. (These will not stick to the leather Smart Covers.)

Please note the "Pearlescent" designs have sparkle through the entire Gizmobie but cannot be depicted in the artwork.