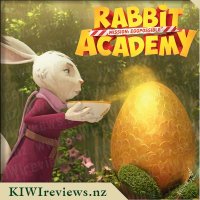 Disclosure StatementFULL DISCLOSURE: A number of units of this product have, at some time, been supplied to KIWIreviews by Icon Film Distribution or their agents for the purposes of unbiased, independent reviews. No fee was accepted by KIWIreviews or the reviewers themselves - these are genuine, unpaid consumer reviews.
Available:
in cinemas from April 7

Rabbit Academy is the story of Max, the first city rabbit ever to be chosen in the master class for Easter rabbits. When the Easter rabbits' most powerful magical possession, the "golden egg", turns black, Max and his friends must find their very own superpower to protect Easter.

Leo, the leader of a gang of city rabbits, wants to destroy Easter and tricks a family of foxes into stealing all the Easter eggs. Max's only chance to save Easter lies in teaming up with the fox Ferdinand.

But can a rabbit really trust a fox?

I tend to watch a lot of movies, both on my own and with the kids, and whilst the kids are growing and their viewing choices are maturing, I still have one who is still loving movies and shows aimed at children younger than her, and so I knew that they would be happy to watch this with me more than their siblings would be (and I did check but the nearly 13yo and the 14yo both said they weren't bothered). The good thing about my youngest is they are currently homeschooled, so it was easy enough to settle down and watch this film (at their insistence I bought a small pack of mini easter eggs to fit the theme). Watching the film, I must admit it took a bit to get into it, magic and bad vs good is nothing new, but I kinda struggled with the street wise gang bunnies, not really sure why.

This film isn't originally in english and has been dubbed, which my kiddo didn't mind at all but I was distracted a couple of times by the obvious disconnect when we had a close up of anyone talking. The animation is good, I will admit that the change in style from what I'm used to always takes a minute or two to feel 'normal' but it looked good and my kiddo said that they thought all the outside scenery was really well done. I think they also really enjoyed this film as they are really starting to get into foxes (the favourite animal of their mentor), even though they were the baddies, my kiddo decided to try and draw them. As far as plot goes, there's nothing new or fantastic about it and I found myself scrolling through my phone during most of the film. I, personally, am not bothered about watching this again and it confirmed for me that the older two wouldn't have enjoyed it at all. This left the youngest, who, after the credits rolled said that they enjoyed it and thought that it was a fun film. When I asked if it was something they would want a DVD of, they said no, but said if it ever comes on Netflix, they might watch it again on there.

Overall, this was nothing amazing, but I would expect that kids around the 3-5 age range would really enjoy it and the parents may enjoy the quiet time from having distracted children.

The most legendary barbarian of all time is back. Having thrived and evolved for eight consecutive decades in the public imagination in prose and graphics, on the big screen and small screen, in games and properties of all kinds - Conan's exploits in the Hybornian Age now come alive like never before.

A quest that begins as a personal vendetta for the fierce Cimmerian Warrior soon turns into an epic battle against hulking rivals, ... more...