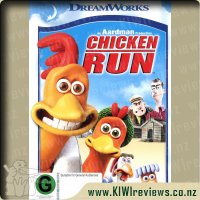 While the chickens on evil Mrs. Tweedy's farm dream of a better life, a clever hen named Ginger is hatching plans to fly the coop for good! The only problem is, chickens can't fly, or can they? Every escape attempt goes foul until Rocky, a smooth-talking, all-American rooster, crash-lands into the coop. It's hardly poultry in motion when Rocky attempts to teach Ginger and her fine, feathered friends to fly, but, with teamwork, determination and a little bit of cluck, the fearless flock plots one last daring attempt in a spectacular bid for freedom!

Featuring unfforgettable characters, incredible animation, and all-star voice talent, this instant classic from the Academy Award-winning creators of Wallace and Gromit is egg-traordinary fun for the whole family!

This came our almost fourteen years ago and I still enjoy it today just as much as I did back then. It is a fun film, plenty of laughs and a great film for the whole family.

Ginger is a hen that dreams of a better life than the one she is living in a poultry farm. Rocky is a chickenizer (womanizer) who ends up trapped in the poultry farm and fools them into believing that he can teach them how to fly. It all comes to a head when Mrs Tweed thinks she'll make better money out of pies, than eggs. What follows is a fun movie as the con artist tries to teach a bunch of hens to fly whilst trying not to fall in love with the one who doubts him and is desperate for freedom.

This is done in clay-mation, a type of animation that I really enjoy, especially all the hard work that goes into it. The voice acting is well done and fully believable, everything is done wonderfully and so you are left with such fun characters. My six year old and four year old both really enjoy this movie and it is one that gets a lot of play time.

This is a really fun movie and great for a family movie night.