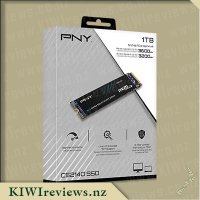 Disclosure StatementFULL DISCLOSURE: A number of units of this product have, at some time, been supplied to KIWIreviews by PNY or their agents for the purposes of unbiased, independent reviews. No fee was accepted by KIWIreviews or the reviewers themselves - these are genuine, unpaid consumer reviews.
Available:
online or selected PC component retailers

Do more in less time with NVMe Gen4 x4; boot up, power down, and load applications up to 6 times faster compared to SATA based SSD's. Designed to deliver the performance you demand, and with no moving parts, the PNY CS2140 is highly durable, less likely to fail, and supports a 5-year limited warranty.

Features and Benefits:
•  Sequential Read of up to 3,600 MB/s and Write of up to 3,200 MB/s
•  Faster boot up, quicker application launch, and improved overall system performance
•  Reliable storage
•  Low power consumption, cool and quiet operation

I have to admit, I'm not really a fan of some of PNY's gear, especially many of their HP-branded USB drives, however, I was assured that this M.2 drive, with its new architecture and multitudinous performance enhancements, was going to change my mind. Being sceptical is part of the job description for a good reviewer, but so is an open mind... so I had to give it a try and see for myself. So very, very glad I did...

Gamers seeking to increase the storage space on their rig without simply buying a bigger HDD will love the super-fast storage this range offers. It has long been known that flash memory was so much better than magnetic storage - in the early days of the tech, Microsoft introduced ReadyBoost that allowed slower systems to make use of any suitable attached USB thumbdrives as virtual memory, adding a performance crutch to the physical memory. To that end, many motherboard manufacturers added a USB port directly on the motherboard so gamers and professionals could slap in a thumbdrive and get a bit of extra oomph. With the advances since then, it was only logical for SSDs to begin supporting and even replacing hard disc drives and their slow, power-hungry magnetic storage system. With the introduction of PCIe, and the M.2 format, the reality of blazing-fast, smooth and power-efficient storage has arrived.

The pack states that the 250GB, 500GB and 1TB units are capable of up to 3600MB/s read and 3200MB/s write speeds and the 2TB is about 8% slower at a maximum rating of 3300MB/s read and 3000MB/s write speeds under ideal conditions - but we all know they don't really exist outside of the testing lab. However, got to be honest and say that if you are used to HDDs, then it really won't matter because you're going to love the very obvious performance boost anyway. To add the cherry on top, the reduced power draw will almost certainly postpone, if not eliminate, the need to upgrade your power supply for a while especially if you ditch the HDDs entirely and there's no denying the reduction in noise will be welcome to users who use their system heavily and/or for long periods of time.

In testing, I found my reads were fairly consistent at 3400MB/s with a 4% fluctuation, and write speeds ranged from 2800-3100MB/s for the bigger files. There was some slowdown when I was moving large numbers of small files - as you would when doing incremental backups or copying over your MP3 library, but it was still a lot faster than a hard drive, though not the fastest unit available these days. It is also worth noting that with a maximum operating temperature of 70°C, heat dissipation isn't as high a priority, so in most usages cases you won't even need to buy a heatsink. PS5 users can opt to buy a combined port-cover and heatsink though since it's a lot more cramped in there than in a PC.

One of the best companions to this drive is the SSD Toolbox app that PNY released - free to download from the website - as it gives you all the tools needed to check and monitor the status of the drive, update the firmware as needed, and even securely erase the drive should you find yourself upgrading some time in the future and don't want to risk your data falling into the wrong hands. There are also a few other little gems in there...

One of the biggest failings of hard drives is the way in which they store data. It can become fragmented, increasing read/write times and reducing performance without regular, and often prolonged, maintenance. Because of the legacy of the technology, SSDs are also vulnerable to the same data fragmentation issues so PNY provides, as part of the Toolbox package, an optimisation process that goes a long way towards mitigating this issue. The SSD Optimizer automatically erases data blocks that contain data no longer flagged as 'in use', freeing them up for priority reuse. Using the toolbox regularly ensures your drive runs at peak performance, and due to the speed of solid-state storage and the enhancements provided by the new 3d NVMe architecture, it's a lot less of a hassle. That said, it's still (as far as I can tell after a brief flick through) still a manual process, so perhaps the next step is an on-device automation of this process.

While this device is marketed towards the PS5 community, it's a sure-fire win, and a reasonable must-have, for the PC community as well. With most of the better motherboards out there now sporting at least one M.2 slot, the days of hard drives are rapidly dwindling. I made this device my primary boot drive, and the performance increase was, frankly, incredible. It's almost as though I have a brand new PC, despite the test rig being built using almost all the parts from the old workstation - I had only to source a new motherboard since the old system was running on a MoBo that didn't have an M.2 port. I should point out that the performance boost is realistic in this case because the old system was running off a 1TB PNY SSD - so it's still an apples-to-apples comparison in almost every regard. The PNY website states that this unit requires at least Win 7, and is not suitable for Linux or Mac operating systems, but with Windows 11 now installed on the system, it's running ultra smoothly so rest assured it's also Win11-ready.

Overall, for the price, this is actually a pretty worthwhile option to consider for most usage scenarios. Only the direst of gamers or professionals who push such high volumes of data around that even a slight increase in performance becomes significant will need to look beyond this range. The 1TB unit that I tested has a retail price of around $250, though if you look around for the best deals you can actually find them for under $200 but those retailers' sites have reported that stock is not always available. It seems that good deals go just as fast as this unit does.

Experience the Arc Touch Mouse: there is no equal in look, feel, and performance. With a dramatic design and easy elegance, this stylish mouse is a perfect fit for your lifestyle. Flick to zip down the page. Tap to stay at your destination. Feel the speed and responsiveness to your touch.