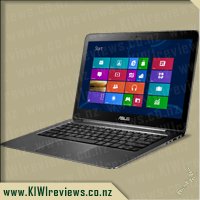 Disclosure StatementFULL DISCLOSURE: A number of units of this product have, at some time, been supplied to KIWIreviews by ASUS or their agents for the purposes of unbiased, independent reviews. No fee was accepted by KIWIreviews or the reviewers themselves - these are genuine, unpaid consumer reviews.
Available:
at selected quality retailers

Work All Aay, then Play
ZenBook UX305's powerful batteries and intelligent power management keep it working for up to ten hours - probably longer than you! So when your long workday is done and it's time to unwind, there's plenty of power left for play.

Just over a year ago, I was lucky enough to review the UX302 model Zenbook, and while it fell a little short of ideal, it was still quite respectable. Expecting better from the UX305, I found myself with mixed feelings about some aspects. While style, durability and great display dynamics are becoming great hallmarks for ASUS, particularly in the Zenbook range, this unit was lacking certain features previous models included... most notably the backlit keyboard, effective cooling, decent WiFi at medium to long range, and a battery that actually lasted as long as it promises. Offset that by the price, in comparison with it's spec-'d peers in the market, and you have a notebook that is a little above middle of the road - a little better in some areas, and a little worse in others.

As an everyday, casual, personal machine, it copes well. It can play basic media without any significant issues, some medium-range games will play fine on it, and it's a good machine to give to your pre-teen kid to do their homework on, knowing that if they try to play any high-end games it will be distinctly underwhelming for them. Throw something like Photoshop at it, and you start to see the issue creeping in. Anything more intensive than that, and you have a potential data-loss failure on your hands.

The sleek design, light weight, and relatively non-reflective matte screen will prove quite appealing to any aesthete out there. If form is more in line with your needs than function, this is a top contender for you to consider, as it will out-shine it's peers, be easy to carry, and most of all prove itself to be quite discrete due to the low profile and fan-less cooling system. Just don't stand it on edge on the back of a couch, or you're likely to loose it between the cushions.

That said, it is great for those who want to carry a slimline briefcase AND computing, without losing room for paperwork, or shifting over to a tablet.

Durability is high, due to the high use of metal - including the screen hinge too, which is a high-failure point in lower-end devices - and the unit feels quite solid despite it's lightweight design. Still, you could find yourself surprised by the weight, because the unit looks as though it should be lighter than it actually is. Blame the metal if you will, but I for one would take the weight over an even lighter and less durable construction. ASUS manage to cram so much into this case, it's remarkable, but despite it's clear attempt to unashamedly adopt and support the newer technologies, it falls over on a few little things. All three USB ports are the newer USB 3.0 standard, which leaves older accessories out in the cold if they aren't fully USB 2.0 compliant. I trialled an old Targus presentation device, that through a wireless USB 2.0 dongle can act as a remote mouse during presentations. While it's a great little unit when the dongle is plugged into a USB 2.0 port, in the USB 3.0 port it failed to operate properly and rapidly caused frustrations. Going with 2x USB 3.0 + 1x USB 2.0 port would have been a nicer nod to users. Also, while the unit provides you with a LAN port via a USB adaptor cable - so you don't have to rely on the patchy WiFi - it also provides w=you with a mini-HDMI port... but no mini-to-standard adaptor cable so you're stuck for running an external monitor without forking out for an adaptor yourself, and no DisplayPort output means no higher-res monitors at max-frequency either. I was pleased to see an SD card-reader port in it though. Discretely tucked away, I almost overlooked it in my first inspection, and the never-outdated 3.5mm microphone and headphones ports are there too.

For such a small machine, there's a very acceptable sized keyboard and trackpad on this baby. The lack of back-lighting aside, the keyboard is very comfortable to use, but the trackpad is smooth and noisy. Even light taps make quite a bit of sound, and the smoothness is awkward to cope with if your fingers are even slightly damp as they will get stiction issues. I do prefer the slightly stippled trackpads as they are very responsive, feel good to my fingers, and never cause stiction, so I am hoping it will reappear in future models. Also, keys are the only things that should click, on a computer... not trackpads. If it is software-driven, as I suspect it is, there should be a 'mute trackpad' option somewhere obvious. None the less, multi-touch and most gestures were well handled, and the usability of the device doesn't suffer hugely from the cosmetic issues.

The display itself is non-touch, so Windows 8/10 may prove a bit cludgy to use. Windows 8 was on the device as reviewed, and I found it as annoying as expected. Hopefully this unit will perform better with Win10 on it, though I don't know if ASUS plan to ship W10-installed models, or save it for later once W10 is actually working properly, after 1-2 service packs have been released. The matte finish on the screen is great, allowing fairly good use in relatively bright, outdoors situations. Glossy screens can be a nightmare if the light gets up above 'gloomy' so this was a great selling point for me, as I would only ever use a device like this when out and about. You may want to go into the Intel HD Graphics settings and have a tweak of the settings though, because some of the little irritations you may experience under default settings can easily be remedied in there.

Upgradability on this unit is patchy - while you can swap out the storage - HDD or SSD - for larger if you prefer, RAM is board-mounted and non-upgradable. Frankly, this strikes me as utterly inane in this day and age, but there you have it, a choice made to save a few millimetres of height to keep the unit svelte and sleek. Why they couldn't shoehorn in a microSD slot for expanded RAM is beyond me actually. Also in a space-saving effort, I am assuming, ASUS went with a fanless design. This is known as passive cooling, as it relies exclusively on radiant and convection cooling to pull the heat away. The high amount of metal in the construction helps a lot with that, however under heavy loads during testing - 3d rendering and utilising CPU-intensive features of photoshop as prime examples - I found my lap getting decidedly warm, and a quick check with the laser thermometer pointed inside the case cooling vents showed temperatures climbing into the 50's, and the underside approaching 30 degrees by the time I was finding it uncomfortable to keep it on my lap. AT this point I also started to notice performance issues as the CPU throttled back to protect itself. If you plan to buy this unit, invest in an active cooling lat too. They plug into a spare USB port and drive a couple of fans blowing colder air at the underside of the case. Yes, it's louder than 'silent' but it's also less risky than allowing the unit to overheat, and less annoying than the unit slowing itself down when, clearly, you are needing some grunt from it. That said, this is NOT a "grunt" unit anyway.

Connectivity and communication via wireless channels is a big thing these days, and the onboard USB-to-Ethernet cable allows you to have full wired speeds if you are OK with being tethered, but there is also a very respectable Bluetooth built in, and a passable WiFi as well. Within 1-2m from the router, I was zooming along at tolerable speeds ranging between 95-102Mbps - almost double what I would consider bare minimum by today's standards - with signal strength at -28dBm, but as soon as I moved into another room, the speed dropped to less than half of that, and by the time I was at the far end of 2 rooms away, I was doing little better than dial-up speeds despite signal strength still pumping at -40dBm. At that point, my phone was performing better than this unit was, WiFi-wise. This was, to say the least, a tad underwhelming.

Overall, despite average battery life - ranging around 4hrs high-use, 6-7 hours of reasonable usage, 12 hours standby, with a flat-to-full recharge time of around 2-3 hours - and the lack of user-experience tweaks like backlit keyboard and nice-feeling trackpad, this proved to be a fairly tolerable unit. What makes it a 'good deal' is the low price compared to it's peers in the same performance range, the stylish design, and the solid construction. It will never be a notebook you love, but it may indeed be one you can like, and possibly even enjoy using. Either way, as something to get the pre-teens as a present, it's a top contender in my book. It has a low-end webcam and microphone, just-tolerable speakers, and not much in the way of volume or bass, but that isn't really too big a deal these days with the proliferation of bluetooth wireless speakers and headsets glutting the market. I picked up a nice little unit for just $30 that gave great sound out of this baby with mere moments of setup to deal with. Worth some serious thought.