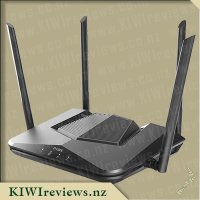 Disclosure StatementFULL DISCLOSURE: A number of units of this product have, at some time, been supplied to KIWIreviews by D-Link or their agents for the purposes of unbiased, independent reviews. No fee was accepted by KIWIreviews or the reviewers themselves - these are genuine, unpaid consumer reviews.
Available:
via online store and selected retail outlets

Next-Generation Speeds
Experience up to AX3200 speeds while 1024-QAM boosts throughput to devices by up to 25% and 160 MHz contiguous channel width gives even more bandwidth. Up to 6 simultaneous streams let you enjoy faster, more enjoyable 4K streaming, online gaming and more, and should you require them - 4 Gigabit LAN ports and 1 Gigabit WAN port gives you faster wired connectivity whenever you wish.

Two-Way MU-MIMO
MU-MIMO technology helps distribute the flow of data to multiple devices simultaneously. With Wi-Fi 6 technology the DIR-X3260 leverages the multi-user version of OFDMA and MU-MIMO for better efficiency of upstream AND downstream transmissions, unlike previous Wi-Fi 5 technology where MU-MIMO could only operate simultaneously in downstream transmissions. This combination greatly increases capacity, coverage and performance in ultra-high-density environments.

Extended Coverage, Reduced Interference
High-gain antennas, built-in power amplifiers and beamforming technology allow the DIR-X3260 to extend the reach of your Wi-Fi and focus a stronger signal in the direction of your devices to ensure a stronger, faster and more reliable Wi-Fi experience. Meanwhile a long OFDM symbol ensures even greater Wi-Fi range, especially outside the home.

Always Up-To-Date
Firmware upgrades can be a pain, but with the DIR-X3260, they are completely automated. Upgrades are so smooth, you won't even notice them. On top of that, the DIR-X3260's Dual Image functionality saves a recovery image as a backup before an upgrade. So, in the unlikely event an upgrade fails, the system has your pre-existing configuration to fall back on.

BSS Colouring
Your neighbours' Wi-Fi could be interfering with your wireless signals and slowing things down. Wi-Fi 6 puts an end to the Wi-Fi strife with BSS Colouring Technology. It makes transmissions more unique by 'colouring' them with their own unique code. The result? Devices can decide whether to transmit signals or ignore them, based on their "colour". Get less interference, less Wi-Fi slowdowns and more range.

With the advent of WiFi 6 (the next generation of WiFi), the growing number of smart-home devices, the increasing uptake of modern smartphones, and lockdown-induced gaming becoming more prolific, upgrading your old router is a smart move. Another growing trend that improves wireless functionality in the home is mesh networking, where multiple access points operate as a singular system, it's a good move to look at a router that can handle being the hub of an expanding network. The D-Link DIR-X3260 is a good choice for the home user who doesn't want to spend megabucks on the gear.

Being a dual-band router, you get solid coverage on the all-too-crowded 2.4GHz band thanks to the innovation of 'colour coding' - where data packets are assigned a particular key that ensures that they will make it through the noise intact - and it will also give you excellent signal in the 5GHz band too. With a growing number of devices supporting 5GHz now, particularly those that can be bandwidth hogs such as gaming consoles and Smart TVs, having both bands available means that the smart steering algorithms can adjust the data flow to best effect, putting the hogs on the faster 5GHz band and shunting the low-traffic devices to the slower 2.4GHz band. This means you will always get the best performance possible with the least hassle. However, you still have the ability to set which device locks onto which band, if you prefer to stay very hands-on with your tech.

Being slightly smaller than previous models, this unit takes advantage of the latest innovations and optimisations, and because of that setup is quite easy. It took less than 10 minutes to swap this unit in place of my older router, and the speedup was evident as soon as it took control - the lagging I was seeing when I downloaded large photos from my phone to my workstation vanished and it was a delight to see the progress bar steadily zooming along at a steady pace instead of the stop-go-stop-go I used to have to wait through while the phone buffered the outbound data while it waited for the old router to catch up and clear the previous packet.

With the unit claiming to support eight data streams at the same time, I had to test that assertion, but since I don't have that many devices, I called in some support from a friend, who brought over a couple of his most data-hungry devices - a VR rig, a laptop and a smart TV. This gave me 9 devices, all vying for bandwidth, and I was surprised to see that my phone was rated the least important. That said, it was still able to sneak enough channel space to check my emails and do a few web searches in between bursts to the other devices without any significant lag, while all the other devices were happily zooming along. This, I suspect, was because my phone was allowed access to the 5GHz band, so the small amount of data going to it was able to zip through at top speed.

My house has a nasty WiFi dead spot in the garage - caused by metal walls - which became an annoyance some time ago, as I work out there on crafting projects and often need to check something online or watch a tutorial to make sure I don't botch the job. Because of that I installed the D-Link DAP-X1860 WiFi extender in a weatherproof housing on the outside of the building and ran ethernet cables inside to a smaller extender - the D-Link DAP-1610 - so my devices had access to the network despite the signal-killing walls. Since the DAP-X1860 is part of the same AX family of devices, it immediately locked on to the signal from this router and gave me about 40% faster data throughput than I was getting before. Such is the power of a mesh network and the new AX standard in action. This, for me, was a real winner and made the upgrade well worth the small hassle of having to reconnect all my smart devices to the new network.

For those with youngsters and/or teens, it will be a relief to know that as with most of D-Links routers, parental controls are already in place and need only a bit of tweaking to secure the really nasty stuff out there behind a locked wall. However, it's not perfect and I was able to access a few sites that I wouldn't want my kids exposed to, but that was mostly remedied by adjusting a few settings, so be aware that the parental controls are something you may need to revisit every now and then.

With the usual 4x gigabit ethernet ports, you can easily connect PCs or TVs to get the very best data rate possible, though I struggled to see any significant differences in the performance between devices using the 5GHz band and the cable-connected ones. Where there were differences, they weren't really big enough to warrant the hassle of running cables - I would gladly accept a slight drop in speed for the convenience of not having to make more holes in the walls or run cables over door frames and behind big furniture.

If you have a well-stocked smart home and use Alexa or Google Assistant (aka Smart Speakers) you'll be glad to know that this unit supports them by default, so resetting your modem can be as simple as asking Alexa or Google to do it for you. However, since I refuse to have a device in the house that is constantly listening in on everything I say, I wasn't able to test this out for myself, so will take their word for it.

Overall, this is a great router to consider if you want, or need, to upgrade your home network with something that has some level of future-proofing in it. The only slight drawback for me was the lack of a USB port on this unit - I had an external hard drive attached to my old one that acted as a centralised temporary storage point so I could transfer data between machines without allowing them a direct connection to each other for security reasons. That said, it's a small thing that probably won't be relevant to most home users, so was easy enough to overlook when it came to assessing the device overall. While not the cutting edge, this is a solid router that will be a good investment for the home user who wants to get a bit more grunt behind their network.