My Cat Can See Ghosts review 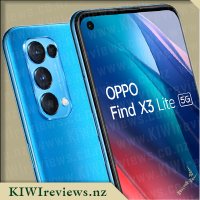 Disclosure StatementFULL DISCLOSURE: A number of units of this product have, at some time, been supplied to KIWIreviews by OPPO or their agents for the purposes of unbiased, independent reviews. No fee was accepted by KIWIreviews or the reviewers themselves - these are genuine, unpaid consumer reviews.
Available:
at selected retailers nationwide

Meet the moment with the effortlessly talented Find X3 Lite. With vibrant video-shooting skills at your fingertips, the only limit is your own imagination - so think big.

Transcend the Light
One vision, no limits. With AI Highlight Video, lighting intelligently adjusts to match the setting, so you can shoot and share video to eclipse expectations - even after dark. Find X3 Lite uses a sophisticated combination of features - AI Highlight Video, Ultra Night Video and Live HDR - to shoot video that's colourful, vibrant and balanced, day or night. Catch the vibe after dark with Night Flare Portrait. Find X3 Lite flares background lighting to enhance the scene with automatic brightness and focus adjustment when creativity strikes at night.

Look Forward and Back
Record your reactions as you shoot. With main and selfie cameras both active at once, you never need to miss a thing. Don't just record what you see - catch how you react as well, with Dual-View Video. Use the main camera to film the scene and the rear camera to capture your reactions.

Unmistakably You
Choose your Find X3 Lite in one of two subtle colour finishes that render your phone a natural extension of your own style - Starry Black and Astral Blue.

Pocket-Ready
With an ultra-slimline body measuring just 7.9mm, Find X3 Lite packs immense performance into a design that takes up less pocket space - and sits snugly in the hand.

As a fairly recent convert to OPPO, and using my devices more for phone and camera than gaming or internet browsing, I am loathed to admit that I am not the target market for this device, however, the lure of a 64MP camera with built-in wide-angle - a drool-worthy upgrade from my previous device at 48MP - and a chonky great battery was far too enticing to let the opportunity to review this go past. While this is the 'little cousin' of the range, it is quite affordable and has very good, if not spectacular, features for its price-point. Being 5G-capable makes it somewhat future-proof too.

A slim, sleek and stylish device, the rear panel has a subtle texture that makes it comfortable to hold without being slippery, even with damp hands - a factor I found surprisingly relevant thanks to the lockdowns, where I inevitably ended up getting or needing to make a call immediately after washing my hands for the umpteenth time in any given day. With a high-spec battery - 4300mAh - I found that I could thrash it quite mercilessly for up to 50 hours before I needed to slap it back on charge, and thanks to the SuperVOOC2 65W fast charge capabilities I had a workable 80% charge within the hour. It's a beast, in that regard at least. Worth noting though - no wireless charge capabilities, which honestly is to be expected from this price-point. You can't have a Ferrari for the price of a family sedan, after all.

The screen resolution was also impressive, at 1080 x 2400, and a 90Hz refresh rate, watching/shooting videos is remarkably smooth and judder-free. Playing with some of the video modes, such as slo-mo in particular, really highlighted how much of a difference the higher framerate makes. Being an AMOLED display, the AI-enhancement modes look as good on-screen as they do in the finished files - rich colours that don't massively over-saturated, good HDR results especially in high-contrast shots such as sunsets and under tree canopies, and some fairly good, if not quite as good as they could be, shots in low-light conditions. Night-shot in particular was a bit disappointing, as the images were noisy and full of odd colour-casting, however when I explored the little "tripod" icon and mounted the camera, the results were vastly better with crisper results and slightly less noise.

Unlike the upper-end devices, this unit only offers digital zoon, which is usually a disaster waiting to be over-used. In this case, however, I was actually quite pleased, to a point. The upper limit is 20x, however realistically up to 5x gave surprisingly good results and up to 10x gave quite usable images that would be fine for family holiday snaps where ultra-fine detail isn't a huge issue. By the time I was up to 14x the images were of no real use to me unless I had the phone mounted to a tripod, and above 16x it was, to be blunt, not worth the effort. Get up and move closer to your subject rather than zoom in to this level. Where this unit really hits its stride is with the built-in wide-angle lens. Even though it's only 8MP, it really gives you some stunning results for landscape shots - which is one genre I take a lot of. It's also highly effective for making smaller spaces look bigger, and making sure you get ALL the relatives in the frame for that group shot. No irate Aunty Karen complaining that you only got half of her face in the Christmas Card photo.

However, not all that glitters is gold, and my pet bug-bear with OPPO's camera app is still there - a good range of basic modes, but none of the really impressive, and highly useful, modes that one of their main competitors throws into their devices. Such modes include 'silky water' and my favourite, 'star trails' - two modes that I used a lot to get those shots that you just can't get no matter what you try with OPPO's manual/expert mode. With a 64MP camera and the decent zoom, those modes would give me the images I can really use to good effect. That said, for me, the resolution is more than good enough that I wouldn't switch back to the other brand just for the extra photo modes.

Though it uses a slightly lower-spec SnapDragon processor, the software optimisations and the extra "Game Space" feature does a pretty good job of keeping it on track and at good speeds. I threw some pretty heavy videos and games at it and didn't notice any significant glitching, slow-downs or frame-dropping. I'm not saying it was perfect, but it did a very respectable job for a phone that costs about 70% of its nearest peer. The trade-off was well worth it, and while you won't be posing and showing off, you certainly won't be disappointed or embarrassed to be seen with this little beast. It's an $800 phone that looks and acts like a $1,000+ phone.

Another perk of this device is the dual-SIM functionality, allowing you to have a work number and a personal number without needing to carry a second phone. It also has a fairly decent 128GB of onboard storage space. The flip side is that it doesn't allow for any extra removable storage - no MicroSD card slot at all. This was a bit of a disappointment for me - I would have expected to have dual-SIM or SIM+microSD, but it's a trade-off you can work around if you are smart about offloading your photos/videos at the end of the day and only keeping essential files on your device. I'm not one of these people who seem to find it a necessity to keep their entire life story on their device, so for me, this wasn't anything more than a passing niggle.

As with many of OPPO's newer devices, the fingerprint sensor is fitted underneath the screen itself meaning that you won't accidentally smear your camera lens while swiping to unlock, and it works really well. The only time I found it had any issues with unlocking was if my chosen finger was wet. One security factor to note, which will undoubtedly polarise the userbase - if you don't use your 5-digit unlock code at least once in any given 72-hour period, the fingerprint gadget goes away and you are forced to slide down and enter the code. This is to prevent, I suppose, anyone hacking your phone with a 'lifted' fingerprint as per almost every spy movie made in the last 20 years. While it's a smart feature, it's not going to be a hit with everyone.

The selfie-cam is also mounted inside the screen space, tucked away fairly discretely in the top-left corner. While it can make selfies a little awkward, it's something you will very rapidly adapt to and soon find absolutely un-noteworthy. It only becomes an issue when your favourite game throws up an advert that puts the SKIP or CLOSE button right underneath the camera, however, that's rare enough that it's not something that will drive you to frustration. Hopefully. What this all sums up to is that basically, the whole front of the phone is viewable space, with virtually no bevels - about 2mm around the sides and top, and the only bevel of note depends entirely on whether you opt to have the bottom-buttons always-on or self-hiding.

Coming with Android 11 out-of-the-box, this unit certainly makes great use of the new enhancements to the Android platform. While OPPO's 'ColorOS' overlay still looks like it's trying to find a middle-ground between Androids functionality and Apple's aesthetic, it's a feature-rich environment that has some stunning 'little gems' - such as the screen-recording feature that lets you capture animated screenshots - great for the TikTok content-makers, real-time image-based language translation, and the enhanced picture-in-picture mode that lets you watch your favourite show or video while still doing other things. One fairly good thing I noted was the minimal bloatware that ColorOS has packed inside. For a change, some of the apps are actually useful, such as Netflix and Facebook, and the 'somewhat niche' apps are few enough that I didn't feel annoyed at wasted storage space.

Overall, while this isn't going to have the die-hard geeks drooling, it is a more-than-capable device that punches a bit above its price-point. You won't instantly regret buying it, and with it being quite modern, it is bound to be high on the list for the upcoming roll-out of Android 12. If you find it on a limited-time special deal, it is well worth snapping it up, but if you want to grab it while stocks are still high, I found it on Mighty Ape here - djin.nz/MA-OppoFX3l

If you are a Vodafone Prepay customer and you are out of credit, you can now get a Prepay IOU $2 Top Up to help you make another call or text when you need it most! This means you will never again get stuck in sticky situations because you run out of credit! Whether it is to get home safely, or just to get you up and running again so you dont. ... more...