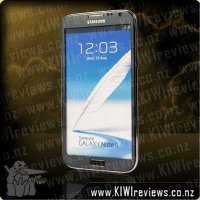 Price:
varies according to plan
Available:
on the Vodafone Network only

Innovative S Pen applications
The best ideas come when you least expect it, the GALAXY Note II will always be on hand for when you get flashes of inspiration for you to jot down ideas.

Capturing ideas couldn't be easier - combine your handwriting with any digital content directly on your screen. You can sign-off your emails on the move and make your phone individual to you.

Write an email while watching a video
The pop up feature allows easy multi-tasking, so you can use S-Note, look at web pages or videos while you're emailing, texting or social networking. Put the pop up wherever is easiest for you, so you can keep working.

Super-powerful smartphone
This high-performance 1.6GHz quad-core processor with the latest Android Jelly Bean 4.1 gives flexibility and personalisation for your phone. The huge 5.5 inch HD Super AMOLED screen makes sure you can see your creation in all its glory, wherever you are.

Functionality:
•  Web Browsing - View the web on your mobile
•  Music Player - Listen to music on your mobile.
•  FM Radio - Listen to FM Radio whilst on the move.
•  Megapixel Camera - Take quality pictures with a built in camera
•  Video Camera - Record short video clips on your phone and send them to another mobile or to an email address
•  Mobile Games - Got some time to kill? Play games on your phone.
•  Connectivity - 3G Extended. This device supports Vodafone 3G Extended coverage (3G over 900MHz)
•  3G Broadband - This device has support for Vodafone 3G Broadband (3G HSDPA)
•  Bluetooth - Wireless technology to connect to other Bluetooth devices
•  Wi-Fi - Wi-Fi (Wireless Network) compatible.
•  GPS - Global Positioning System
•  USB - Connects to devices via a USB Cable
•  Calendar & Contacts Sync - Synchronises your Calendar & Contact with your computer
•  Expandable Memory - Store more music, pictures, videos and data by increasing the memory card capacity.
•  Alarm Clock - Built-in alarm clock to keep you on time

I have coveted this phone since before it was announced, I was looking at getting it's predecessor and when I was doing research discovered this one was only weeks away from being announced so thought I'd hold out. Once it was announced and turned out it was all it was hyped to be, I set about waiting for it to hit our stores (and have the money for it). It arrived finally but through importers rather than providers but I still didn't have the funds. Finally Vodafone announced they had it and I'm pleased I waited as the one that they stock (DC version) has been developed specifically for their new network, something the other ones aren't, so while they'll work and do all the same things, the network coverage may suffer.

It is a very large phone/small tablet, otherwise known as a phablet. I have found, since getting it, that my computer is turned on much later in the day than I usually would as it can do everything I use my computer for. Web browsing is excellent and I often find myself reverting to the full site rather than using mobile sites as the screen size is large enough to view them easily and you can also zoom in with ease.

The Note II is so packed with features it's hard to know what to include and what not to, the S-pen (stylus) is really useful and the handwriting software is excellent, even with my scrawl. There is no auto-correct (that I've found) and the word suggestions for texting are very often spot on so you don't even have to start writing just click on the suggested words.

There's a few too many included programmes such as Dropbox and Flipboard which some might find useful but they're not for me. Being an android phone you have access to the Googleplay store where you can pick up some excellent apps and widgets, Samsung also has their own store which is where you'll find S-pen apps.

Overall if you're after a phone that can do a little bit of everything, and do it well, I would recommend it. If you're tossing up whether to get a new phone or a tablet, or needing/wanting to get both, then it's well worth a look. If you want your phone to be a phone then it's probably not for you but if that's the case you probably haven't bothered to read this anyway!