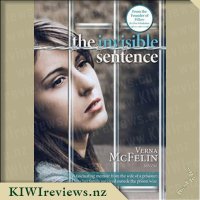 This is the incredible story of how a woman and her family survived poverty and injustices. How did a woman who suffered such trauma go on to change the face of the justice system in New Zealand and the world?

Verna and her children's lives changed forever when police knocked on her door one evening and her husband was arrested for kidnapping. He was tried and sentenced to eleven years in jail. While visiting various prisons over the next few years, Verna soon realised that not only were the prisoners serving a sentence, but their families too were serving their own invisible sentences outside the prison wire.

An absolute gem of a book. Verna talks about the spiritual journey she took to help see her through some horrifically difficult circumstances, beginning with one fateful night in Oamaru. I was not aware of the incident in question, but it sounds like it rocked the country to its core.

Her memoir is convincing and the attention to detail is beautiful. There are some very moving passages, particularly around her encounters with the spirit world. I thought the story about the fish and chip shop was particularly touching (and puts things in perspective). The bleak and otherworldly prisons are also very well described. I also enjoyed the part at the airport with the men in their Hawaiian shirts - a good touch of levity to an otherwise serious subject matter.

I'm sure I will re-read this book many times. There are some excellent universal lessons here. Themes of forgiveness, strength, loyalty and determination shine through. I was touched by how generous people in the book were with housing and rent. I wonder if it would be the same today given the housing crisis.

I look forward to the sequel! Pillars Is a wonderful organisation and I'm glad things worked out so well in the end for Verna and her children.

I have an interest in social issues generally through my previous work within the educational guidance network, both in New Zealand and overseas. Among other things, I have worked with and mentored teenagers who have a family member in prison. I was fascinated therefore to have the opportunity to learn about Verna McFelin's experience and her subsequent role in the founding of Pillars - a national charitable organisation that works with prisoners' families to ensure their children are supported.

Miriama Kamo's preface was a useful introduction to Verna and the work she has done for the wider community. Not only does supporting the families of prisoners help them personally, but it also has a wider-reaching impact on society in general. Prisoner rehabilitation is dependent on the attitudes and support of the people around them, and is enhanced by the recognition that positive change can happen only if it is actively encouraged.

I would like to have learned more about the Pillars programme and the difficulties encountered by other families affected by community prejudices and lack of understanding. Verna discussed some of the problems she had faced with her own children, and the way in which they were constantly marginalised, but the information on other families was quite sparse. Her family ultimately survived the experience, and her children all went on to build successful lives, but it would have been interesting to see the statistics on those who were not so lucky.

I read with sympathy the account of Verna's responses to the lack of support from various bodies and the many struggles she had to look after her family while maintaining her dignity. As she rightly states, it would be all too easy to join the ranks of petty criminals rather than try to survive within systems that are ostensibly set up to perpetuate failure. That she did not succumb but rather maintained a positive outlook on life is commendable. Her action in spearheading the Pillars charity has undoubtedly saved many more families from falling victim to poverty and marginalisation through no fault of their own.

I did have a couple of difficulties with the text. The first was with the layout, which included a key extract on many pages in the form of an enlarged bold insert. It detracted from the continuity of the narrative as my eye was continually diverted to these "boxes". I am unsure as to what purpose they served. It made the text present as a series of news articles rather than a continuous flow. Possibly they were included for those who wanted to just skim read the text rather than reading it in its entirety.

The other problem I had was with some of the very personal descriptions of Verna's encounters with God and her responses to them. While I accept that this is a book written from a Christian perceptive, I found it hard to reconcile some of her statements. Most of them refer back to the Judaeo-Christian tradition, with a strong emphasis on the charismatic movement, yet there are a couple of instances where Verna states that her brand of religion is for all, irrespective of their religious persuasion. And when she discusses the founding of Pillars, she assures her readers that God had "made it clear that it was not to be a Christian organisation - that it was for everyone".

New Zealand is a religiously diverse country: Hindus, Muslims, Buddhists, Jews, and Sikhs - and many others - live and work shoulder to shoulder with Christians of many denominations. There are also New Zealanders who identify as atheist or agnostic. I would like to see a more global view of God presented, one which embraces all our communities, because this would make the book's many positive messages more accessible to all.

This scary new anthology, with poems by Helen Dunmore, Adele Geras, Kaye Umansky, Tony Bradman and many others will make you tremble with fear and shake with laughter!
Do you DARE to look inside?