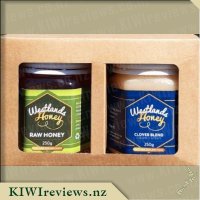 This product consists of a designer made natural cardboard recyclable box containing 1 x 250g Clover Blend Creamed Honey and 1 x 250g Raw Honey. It makes a perfect gift on its own or can be included in a gift hamper.

The two jars contain 100% pure honey with no additives. No heat treatment or fine filtering is applied so the honey retains all its original enzymes, vitamins and minerals. The honey is sourced from the Mackenzie District and South Canterbury in the South Island of New Zealand. Once washed, the honey jars are fully recyclable.

I was delighted to find that I had won a gift box of this product. Honey is something that everyone in our family enjoys, but quality honey can be quite hard to source - and until you taste it, you don't know whether or not you will like the flavour. The difference between brands and even batches can be quite marked, depending on what flowers the bees have been working, but pasteurising and other processing can strip the delicate flavour away and result in a watered-down version of the original honey.

It was reassuring, therefore, to find that both jars were unadulterated, with nothing but pure honey inside. The raw honey has a stronger flavour and is more of an acquired taste; the clover honey is more delicate, and would probably appeal more to those who are used to the supermarket variety! But between us we thought both varieties were equally delicious, and it was not long before the first jar was empty.

My partner had a sore throat and had been dosing on commercial cough lollies, so I suggested a teaspoonful of raw honey might do a better job. Neither of us could believe how quickly the inflamed tissues responded to the treatment. Three teaspoons, one an hour, and in less than four hours the discomfort had eased considerably. Many years ago, I kept bees myself, so I know just how effective honey can be for various ailments; it has always been my go-to remedy for sore throats. Other people are often unwilling to believe it until they have tried it for themselves.

Next day, I made toast for breakfast with tahini spread and raw honey. Honey goes well with all sorts of savoury or nut spreads, and this is a combination I especially like because the two flavours blend into each other. It is also a very good choice for someone with a sore throat - even if the discomfort is a lot less than it was the night before. Although my own throat was fine, I made sure I had some too. Just in case, you understand!

The children had tried the raw honey, but both preferred the milder flavour of the clover honey. Mr Ten likes honey on white bread, although he made his own sandwich so there was rather a large hole in the jar contents when he had done. Miss Eight made a smoothie with yoghurt, honey and a banana; she said she liked the sweet flavour which offset the effect of the slightly underripe banana. She gave everyone a taste; I agreed that the addition of the honey made it taste really special.

We were all impressed by the way the product was packaged. Instead of offering the jars in a fancy colourful wrapper with quirky graphics and fancy text, Westlands have opted for a no-frills cardboard outer which is designed to appeal to those who care about the environment. The cardboard is fully recyclable as are the containers. The very simplicity of the presentation has sophisticated appeal - I would consider using it as a gift for the person who has everything. That is, if I had not given in to temptation and just eaten it myself.

Try them layered into a lasagne instead of pasta sheets! Smooth-edged and soft, they're perfect filled, folded, wrapped, stacked or baked in a huge range of wrap recipes.